Ah yes, the time has come when I’ve to add another candle to my birthday cake…and I’m only 29 years young! Wow, I can’t believe this is my final year as a 20-something (30 sounds like a whole new level altogether, full of seriousness and responsibilities – not!) and strangely, it makes me feel a bit sad. Sad because I’m getting older? Hmm, not really – age is just a number and you are only as old as you feel. I reckon the real reason I’m feeling a bit down is because I’m due a holiday (plus the fact I’m not feeling too well and super drugged with this medicine the doctor gave me for my muscle spasm). Every year for the last 2 years, I’ve spent my birthday in some tropical Pacific island, basking in the sun in my bikini drinking cold beers and swimming with the colourful fish for a week. Can't do the same this year with me trying to pay off my loan sigh...ah well, I will just have to hold out for another month till the weekend trip away with Jono to Melbourne during Labour weekend – looking forward to it!

This year's birthday celebration was low-key – I had a group dinner with close friends at Restaurant 88 last night where we got to catch up over drinks and the delicious Vietnamese cuisine. We started off with drinks at 5.30pm and I tried their Saigon 333 beer which was nice and somewhat sweet to taste. A few of us got entrees and I got to sample some stuffed chicken wings with pork and prawn, and caramelised sticky baby back ribs as we await more friends to turn up. Yummy!

I like the ambience, service and food at Restaurant 88. The wait staff were very efficient and prompt with serving, and as discussed when I made the booking, we were seated on the mezzanine floor which felt more private because we had the back area mostly to ourselves. Sitting in the middle of our long table for 12, I listened to and joined in the conversations around me and watched my friends chatter away while silently pondering how much has changed since my last birthday dinner. To start, Scott’s no longer around for a joint birthday party. Many friends from previous parties have now moved overseas and I can’t help but miss their presence this time round :/ On the up side, several new faces like Ruwi and Thedin (they gave me a book, A Thousand Splendid Suns by Khaled Hosseini, the same author for book The Kite Runner – thanks guys!), and Geoff and Nicola (thanks for the bottle of Riesling!) were at the party this year. And Jono’s not some guy I was ogling from afar but my bf for over 11 months and still falling in love with (back then I wasn’t sure if he was ‘available’ :P)!

My main meal was the Saigon Grilled Chilli Spiced Fish with Shelled Tiger Prawn, fish fillet cooked in a chilli and spice paste with tiger prawns, served with steamed rice and Asian salad. It had a kick to it but not as spicy as I thought. Usually cost $25.50 but Jono and I used our Entertainment Card so we got one of our mains for free - yes! Jono had my favourite dish at the restaurant, their Saigon Lemongrass Chicken on Coconut Rice Vermicelli (also $25.50). Hmm, looks to me these two dishes are quite popular with half of us ordering the same dishes :)

Gosh, I’m feeling so stuffed having the entrée AND the main. “Share a dessert?” asked Jono cheekily. God no – I’ll explode!

Friends started to take their leave and the rest of us (Jono, me, James, Stacey, Geoff and Nicola) went to The Apartment for a cocktail before calling it a night. Thanks everyone for coming to my birthday dinner – was lovely to see and catch up with you all! Photos taken last night here.

I woke up this morning showered by hugs, kisses and birthday wishes from Jono – thanks baby :) I wonder what is this ‘surprise’ he had organised…he mentioned it in the birthday card that he has a surprise for me but he wasn’t going to tell me what it is or when I would get it. I was quite surprised when he said he was giving me his iPhone 3GS to me as a present several weeks earlier (he's now got an iPhone 4). Wow, an iPhone...I've never imagined owning such a flash phone let alone an iPhone...I've had it for a week now and still learning how to use this cool gadget but I'm loving it. Thanks Jono for the awesome gift! But this was not the 'surprise' he mentioned in the card. What is it??

Around 10.30am, Jono called me on my office phone (yes, I am working on my birthday) asking me if I’ve received something. Er, no…am I supposed to be getting something? “I’m going to call them up to see what’s going on…” said Jono, still not telling me what on earth he’s sending to my office. Grr…

About half an hour later, the receptionist sent me an email to inform me that there was a ‘special package’ to pick up from reception. Oh goody, my surprise is here! And it was a gorgeous bright and cheerful bouquet of flowers delivered by Flowers Manuela from Jono with a little note that saying “Just so you can’t keep it a secret”. Well, there was no where I could hide the flowers and one by one my colleagues caught sight of the bouquet, asked what the occasion was and wished me “Happy Birthday”. Oh, the little devil – he so knew that this would happen and I was doing so well keeping it quiet in the office! Thanks for the flowers, baby – you’re so sweet xoxo! Photo of my lovely bouquet of flowers: 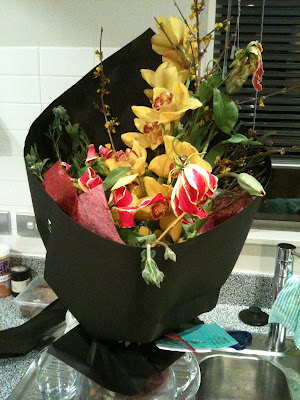 Oh, and I haven’t mentioned the throngs of posts on my Facebook wall, texts and emails from all over the world, family and friends sending their birthday wishes to me. I feel so spoiled with all the attention :) Thanks everyone!