Today kick-starts 2 weeks of me volunteering as an usher for The New Zealand International Film Festival (NZFF), a national event held throughout NZ showcasing movies and documentaries from all over the world. After a successful premiere of the event last year, this year’s festival is even bigger with over 150 programmes for viewers to choose from!

I applied to become a volunteer usher when I first saw the event poster in town some 6 months ago and went to the website to see if there were volunteer roles available. Most festival events in town often seek volunteers to assist in all sorts of jobs and in return, the volunteers would get free tickets to the show(s). I’ve done similar volunteer roles for WOW and the Brazilian film festival last year and was so happy when I received an email from the NZFF event manager, Erin, informing me that I’ve been selected to help out this year! Yay!!

My job as an usher mainly is to seat patrons for the festival screenings and cleaning up the cinema after the session. I’m rostered on for 9 sessions (minimum 8 sessions per volunteer) across the 2-week period with all of the screenings at the Embassy Theatre, the main venue for the Wellington festival. Prior to the start of the festival, all volunteers had to attend 2 induction briefings: the first session was a briefing to get to know everyone (there were about 30-40 volunteers, some of whom I recognised from other film festivals but none I knew personally), informed of the code of conduct and what our responsibilities were, as well as given a festival t-shirt and volunteer pass which we had to wear during our shift; the second session was to orientate us on the venues where we would be working in, where the fire exits and cleaning items were located. Wow, I never knew Embassy Theatre could fit up to 700 patrons and had a whole downstairs storage area hidden behind the thick drapes next to the large screen!

Oh, and we also got 10 free staff vouchers to non-bookable screenings during the festival – this meant movies that were on BEFORE 5.30pm on weekdays, which didn’t really work out for some of us who have a day job. And the vouchers weren’t transferable either so pretty much most of the vouchers would be put to waste :( Hmm, I’ll have to re-jig my work times to fit in a movie or two during the daytime…

Rushed home after work to drop off my stuff and get changed to head back to town for my 7.30pm shift at The Embassy Theatre only to find that my car has disappeared!!! I was walking towards home from the bus stop and had a strange gut feeling that my car was missing and when I looked towards Wilson St where I had left my car parked yesterday, my car was not where it was meant to be! ARGHHHHHHHHHHHHHHH!!!!!!!!!!! Where the HELL is MY CAR?????!!!!! There was no note, no mark, nothing, NOTHING at all to give me any clue who had taken the car or where it had gone to. Oh my god, oh my god!!! Ok, ok, calm down, Angelica, you can work this out…I headed back to the house after leaving a frantic message on Jono’s mobile informing him of what had happened and proceeded to look up Wellington City Council – Parking, ringing up Illegal Parking Complaints to check if my car was towed (my car getting towed was my first guess as I highly doubt some hooligans would dare lift my car and take it away in broad daylight). “Oh, is it a silver Yaris? Yes, it’s currently down at the waterfront on Barnett St by Te Papa,” said the man on the other end of the line. On further inquiry, it turned out that the reason my car was ‘relocated’ was because it was blocking the Wilson St driveway of the Pacific Islanders’ Presbyterian Church. What?! I’m sure it was NOT blocking the driveway at all! The man on the phone continued on to say that I wasn’t parked 1 metre away from the sides of the driveway so it was pretty much my fault. What about the car that has its butt sticking out on the other side of the driveway? How come I’m towed and not that person’s car? Seriously, this is just bullshit! There weren’t any markings on the street to indicate so and really, do drivers make sure they are parked 1 metre away from the driveway?? No one does! Argh, I can’t believe the church people would do this to me!! This is a photo of the driveway: 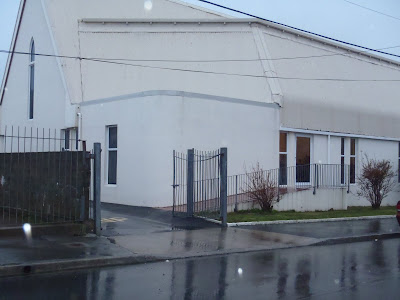 How could I have blocked it when the driveway is that wide, even if I really am parked near the edge of it? Unbelievable! Worse, I sounded like an absolute nutter on the phone when Jono re-played the voicemail I left him on phone. How embarrassing… :/

With the car now located, I headed back into town for my 7.30pm usher shift. Cinema-goers were just leaving the theatre and I joined in the existing ushers from the earlier shift helping to pick up rubbish, glass items etc and sweeping up popcorn before the next lot of patrons arrive. Each usher had to sign out for torch lights from the box office downstairs and before we opened up the doors to the patrons, the head usher for the shift would gave everyone a quick briefing and allocated us to our areas to seat patrons for the session. I was quite nervous as it was my first shift and my head was still trying to remember the seating numbers but it wasn’t that hard and I was having fun ushering :) People were generally happy, cheerful and appreciative of our help finding them their seats though we also have some who brushed off the ushers, insisting they were fine to find their own seats. Ok, if you insist…

Tonight was the world premiere of movie The Predicament, officially opening the festival with a short speech by director Jason Stutter before the movie was played. The theatre was fully packed with cast and crew of the movie including actress Rose McIver, and the general public who managed to get a ticket for this one-showing only movie. I was expecting to see Jemaine Clement but I don’t think he showed up…Of course, as part of my shift, I had to stay during the session and got to watch the movie for free! The first 15 minutes were somewhat interrupted as I was still ‘working’ – we had to show late-comers to their seats illuminating their path with our torches. Ushers were not required to stay in the theatre during the whole session but most of us did – free movie, why not? The movie itself was strange, dark with its own interesting twists and humour but quite good overall. Us Kiwis are really tapping into the movie industry :)

Did another clean up with the ushers for the 11pm session which was a horror movie (thank god I wasn’t rostered for the horror flick!). Yawn, what a long day this has been…Headed off to Barnett St parking area to collect my car after my shift and the car looked in perfect condition which was good news. The bad news though was I now have to pay a fine of $92.50 for the offence and towing. Great, Jono just got a fine earlier this week for an expired Warrant of Fitness (he had been away and left his car parked on the street so the ticketing person who walked past issued him the ticket) and now me. That’s like $300 between us poofed into thin air! Argh, I can’t believe our luck!!