I’ve not been working out for the past week and was feeling rather yuck so went swimming for the first time since my ankle sprain this morning. Hmm, it felt weird…I didn’t seem to have control of my left ankle (it lolled in a weird angle and felt sore at times) and not swimming in a straight line like I normally do…maybe I should have given it more rest…but I need to work out…but I need to rest it so it’ll heal…ARGH! I JUST WANT IT TO GET BACK TO NORMAL!!

Popped over to Costume Cave after my swim to find a costume for the parties I’m attending tonight. Yes, parties, plural – Colm’s going away party which had an Adventurer/Heroes theme, and Stacey’s Dirty, Flirty, and/or Thirty 30th birthday party. You can see that my friends like me have a penchant for costume parties haha! Hmm, Catwoman would suit both themes nicely and I’ve always wanted to play Catwoman. M-e-o-w! :P

Some 8 costumes later which included Catwoman, nurse and army girl, I ended up leaving the place in a space air hostess costume – there wasn’t anything that would fit both the themes AND fitted me (everything was just too big)! The folks at Costume Cave were so excited, clapping their hands happily when they completed my costume with a light blue wig, short gloves and white boots, even asking me if they could take a photo of me to use on their website. Er, sure, why not? Here’s the photo they took: 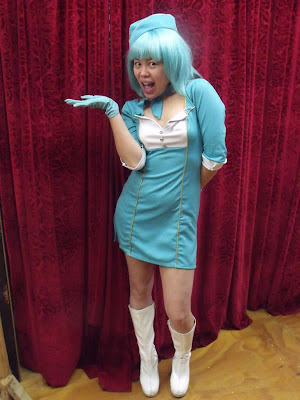 Around 7pm, I headed out to Southern Cross Bar and Restaurant to meet up with Colm and gang for dinner pre-party. Colm has quit his job at Telecom to embark on a new adventure, training to be a ski instructor in the South Island for the rest of the winter season - crazy! But that Colm – he’s always doing things most of us wouldn’t dare break out of our comfort zone to try. So long as it’s something that makes him happy, I say go for it, man!

Friends arrived in dribs and drabs, most of them NOT in costume tsk, tsk :/ Colm was dressed up as Che Guevara and Karen had the perfect Dora the Explorer look – she even had the backpack and telescope to suit! Oh but best of all, she brought everyone a little goody bag of chewy candies!! Something to snack on as we waited for our steaks to be served :)


Ok, DO NOT ever order the Classic steak with fried free range egg and chips - cost me $19.50 and it was terrible! The steak was tough (I asked for medium rare!), somewhat burnt on the outside and not what I expected of a standard pub steak for that price. Should have gotten myself a stone grill steak instead!
Chatted and laughed with friends over drinks and around 9.30pm, bid them farewell to head into town to Stacey's birthday party. Enjoy your time down the South Island, Colm, and keep us posted on your new adventure!

Stacey's party was a joint birthday bash with Amalia, both celebrating their 30th this year. Almost everyone at Vespa Lounge (located on Allen St) was dressed up in a costume of some sort, dancing salsa to the Latin tunes Ramnish was DJ-ing. Stacey looked smokin' hot in her red long-haired wig and shimmering red dress as Jessica Rabbit, Rodney was dressed up as a stripper fireman while Willy-John came in a full cat suit haha! Several of the girls were dressed up as feline characters and in high-school uniforms - definitely dirty and flirty :P

I attempted to dance to a few salsa songs but the many turns and spins was just putting myself at risk of further injuring my ankle so I ended up sitting on the couch with the rest of the swing dancers watching boredly as the salsa folks danced the night away. Sigh...

"Come on, let's go for a walk," suggested James and we headed out and ended up in The Apartment Bar a few doors away for a drink. The bar is the latest addition to the lounge bars in town and one I've not been to. As you step into the bar, it feels as if you've entered a luxury suite filled with leather couches, a fireplace, a massive bookshelf, plush white towels in the bathroom and there's even a bedroom! Plenty of space for people to chill out and relax after a long day in the office, I'm liking it! Oh, and they have nice jazz music playing in the background :)

We sat by the bar chatting and laughing away as we sipped our cocktails. I looked very much like an air hostess having a drink at the bar awaiting to board my next plane hehe...James told me that the men in the room were totally checking me out as I beelined through the crowd from the restroom towards the bar. My hem line, you mean? ;P James and I always dress our best for costume parties and both got several compliments from random strangers on our outfits! Oh yeah!!

The place gradually got busier as the night went on and the place turned from a relaxed lounge bar to another ordinary bar where young people get themselves plastered. People around us were getting rowdy and people were standing shoulder to shoulder, pushing about as the swayed the more they drunk. Okay...I think this is our cue to leave...

James headed off for home while I returned to Stacey's party to find that Vespa Lounge has now opened its doors to the public, a sign that it must be past midnight (Stacey and Amalia had the venue booked out till then). A mix of friends and randoms in the crowd, I caught up with a few friends and around 1am, headed home too. Yawn...way past my bedtime...Photos taken tonight: http://www.flickr.com/photos/8070917@N05/sets/72157624300100505/detail/