Slept in on Sunday morning and got up about 11am to have late breakfast and prepared Moroccan lamb shanks in the slow-cooker for dinner. I’m not going to be home most evenings the next 2 weeks due with my shifts at the NZ International Film Festival and since Jono was around and wanted lamb shanks (I bought them last week and Jono loves the Moroccan lamb shanks I make, recipe courtesy from Scott) for dinner, we decided to make it today, even though it was a bit rushed for me trying to prepare the meal, cook and run off to an afternoon ushering shift at the Embassy Theatre. Ah, the things we do for love…it’s quite alright actually as I have my personal kitchen hand to help me so it all worked out well :)

The movie I ushered for today was a French film title Lourdes, by far the most depressing movie I’ve seen at the festival, not because the movie was bad but the story just made me and other cinema goers walk out feeling hopeless. The movie was about a group of people on tour, some sick or disabled, taking pilgrimage to the religious shrine Lourdes, in hope God will answer their prayers. The main character Christine has multiple sclerosis and was wheel-chair bound but was able to walk for a few days, to which her ‘miracle’ was embraced in celebration of God’s almighty power by the tour group only to find out it was short-lived (she was back on the wheel-chair on the last day of the tour). A movie was really sad, and it just makes non-Christian believers further hold true that there is no such thing as God (and Christians feel doubtful of their beliefs). Not a movie I would recommend to end the weekend…

Rush, rush, as usual. Headed home at 6.15pm, dropped in the prunes and a few tablespoonfuls of honey into the slow-cooker (finishing ingredients for the dish) and drove out again to Southern Cross Bar with Jono to Antje, Ramnish and Annie’s farewell party. The day has finally come for friends to say goodbye to these three – Antje & Ramnish heading off to Germany and Annie embarking on a new adventure on her OE in UK. So many people turned up and huddled in the outdoor area that was booked for the party. Lots of photos and two large cards for friends to pen in their well wishes (where did Lily get so many photos taken over the years that had me in it??! It was printed on the card!). We’re going to miss you guys heaps! Best wishes in your new adventures and keep us in the loop on what’s happening in your lives! Photo taken of us at the farewell party: 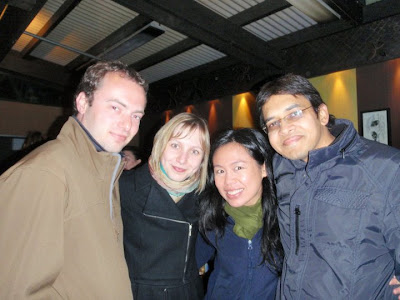 Jono, Antje, me and Ramnish

“You guys have to come visit us in Germany,” said Antje and Ramnish to me and Jono. Hmm, Germany…We’ve got what, like 6 or 7 of you in Germany now? That would be a great opportunity to head over to catch up with old friends and have a local show us around. Ooo, feeling the travel itch…Being at the farewell reminded me of when I said goodbye to many of the same faces back in 2007 and I’ve now been back for almost 3 years! They would be back soon enough, I’m sure :) Left the farewell for home around 7.30pm. Going to miss you guys…lots of hugs…no tears, no tears!

Gee, my whole weekend has just whizzed by so quickly – there’s just so much going on and I’m knackered! But for now, let’s dig in and devour the yummy lamb shanks we’ve made!!