Frankly, I should sleep in but couldn't sleep very well due to the damp patch on the bed. Jono, in his rushed packing for his weekend trip away with the boys, had left his uncapped water bottle on the bed which leaked through parts of the sheets, duvet and mattress - an unpleasant surprise for me when I hopped into bed to find the bedding cold and damp at 2am! Spent most of the night curled up in a dry corner of the bed (was pointless changing the sheets since the mattress was soaked too)...Ah, might as well get up, run some errands and air out the bedding...

After a day of running around town, I caught up with Chris around 7.30pm for drinks at Mighty Mighty - Chris had just returned from his trip to Malaysia and Japan and us two had a few beers catching up in a rather empty bar (the night was still young). "What? You're going away again???" I exclaimed when he told me that he will be stationed overseas for several months for work. Hmm, all my close buddies are leaving or going away one after another - who am I to call up and hang out with anymore with you guys all away? :( Hmm, we'll have to catch up again before you shoot off!

Around 9.30pm, Chris and I walked over to Bodega to meet up with Claus who was visiting Wellington for a few days. Claus had sent out text messages earlier today to say that he would be at the bar for Brazilian party 'The Beautiful Game' hosted tonight in conjunction with the start of the football fever and asked us friends to catch up with him there. It has been almost a year since Claus moved to Melbourne and it was lovely to see him again - he looked and sounded much happier since moving to Melbourne (in fact, even Sharon and Kalwant are happy with their lives in Australia - is it really better across the ditch?) and I'm really happy for him :) Didn't get a lot of opportunity to talk much with Claus as so many friends from the Brazilian community were also here tonight, everyone getting a slice of Claus' time at the party. Still, it was nice to catch up even though brief - will have to keep in touch! I too took the opportunity to catch up with other friends including Celine who had recently returned to NZ after taking a year off traveling the world. I've not been out to many Brazilian events of late and it was nice to catch up with familiar faces I've not seen for some time :)

Around 10.30pm, Wellington band Zigiridum entertained the crowd with their Afro-Brazilian lounge-jazz-funk music, a band that is quite different from the likes of Brazealand who played more traditional Brazilian music (Brazealand has disbanded earlier this year). The band is made up of a mix of Brazilian and Kiwi band members with Alda Rezende as the lead vocalist and a few senior members of Batucada (including Batucada director Tim) playing in the band. A rather refreshing mix of soulful voices, percussion, guitar and sax playing original compositions as well as Brazilian classics. Definitely got the crowd up on their feet dancing!

Is Alda stoned?? There were moments when I thought she might just fall off stage or miss her cue to sing but whether she was stoned or drunk (or not), she managed to keep it together for the full hour of the gig, singing in perfect harmony with the band. Impressive...

DJ Bobby Brazuka was up next, mixing and playing an assortment of awesome Brazilian tunes but sadly most people left the party and only a few were left on the dance floor. Claus took his chance to show off his funky dance moves, criss-crossing his legs dancing all around the near empty dance floor. I reckon if the place was packed, it would definitely be pumping with energy to DJ Brazuka's music but it was just plain dead. What a pity!

Around 12am, I said my goodbyes to the boys and headed home. So tired...need sleep...Photos taken tonight at the party: 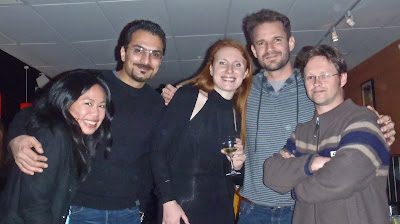 Me, Pooria, Celine, Claus and Chris 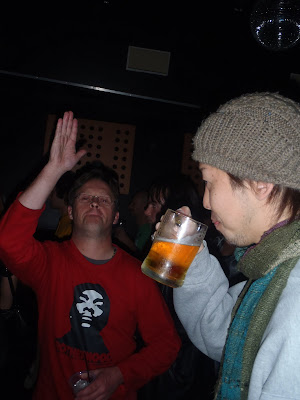 Chris and his mate drinking and dancing on the dance floor 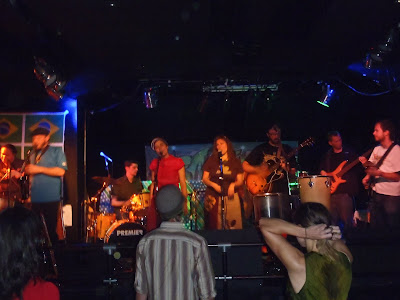 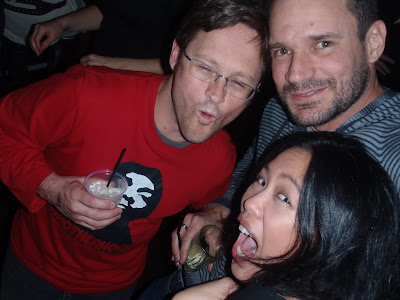 Photo of Chris, Claus and me 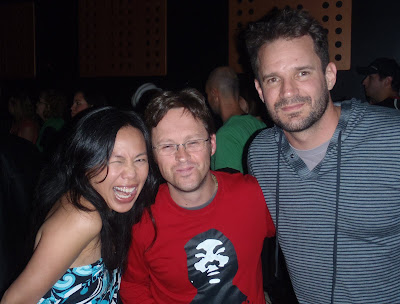