Death and the Dreamlife of Elephants (12th November 2009)

...cough, cough...cough, cough, cough...oh my god, when will I be done with this cold? From a stuffed up nose to nose bleeding when I sneeze and now coughing through the night. I've not had proper sleep in 2 days! Die bugs, DIE!!

Caught up with Liviu, Polly, Ana (Liviu's friend who's also a Romanian), Rosel and her work colleague around 8pm to watch the play Death and the Dreamlife of Elephants currently showing from the 10th - 21st of November at BATS Theatre. Cost us $13 each for the 2-hour show with a 15-minute interval in between. The theatre's foyer was decorated with lots of origami elephants on hanging mobiles and apparently bits and pieces of information about the play have been found located in various places in town - a random photo here, some origami there, even a website that's interactive which was how curious me got Liviu to round up a group of friends to watch the play together. Photos taken at BATS theatre on my mobile phone: 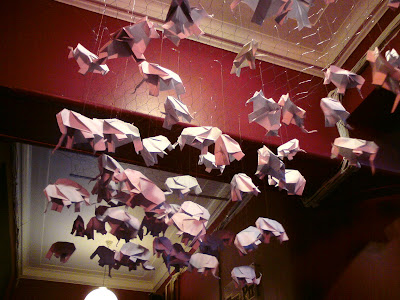 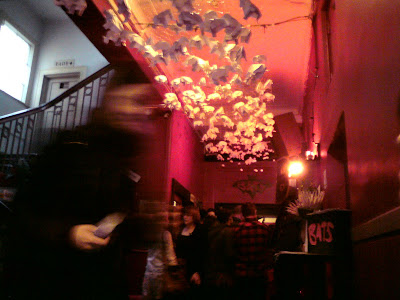 At the foyer waiting for the show to start 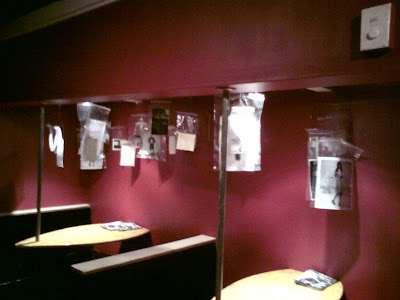 Random photos of the characters in the play


Death and the Dreamlife of Elephants is a dream-like story that explores the questions we face on a daily basis - death, spiritual beliefs, family, growing older, the natural violence of the world and searching for our purpose in life. Upon entering the theatre (we were lucky to have front row seats), we saw many sliding screens built for the purpose of the play and I'm sure were all wondering what it was for. Hmm...

The play focuses on the life surrounding Julian Gallo (played by Vaughan Slinn), a recently divorced man who's unemployed and mourning the loss of his dead mother, searching aimlessly for a purpose in life. He starts off walking through the busy streets of Wellington (the cast were all walking in different directions creating an image as if the audience were actually sitting somewhere at Cuba Mall watching people walk by) in search of this building where his job interview was at, then searches through room after room to find the office (the cast would move around and get into the different roles/positions as Julian walks by, as if we were watching him walking past the HR office, conference room, training room, helpdesk etc). The use of the sliding screens were fantastic - it was a door, a closet, a window, a lift - creating a magnified imaginary space as it changes setting with the plot.

In his aimless search, Julian meets Kerryn Bell (played by Hannah Banks), a university student at the waterfront one evening and they soon became good friends. How did I know it was the waterfront? Well, they had performer Paul Waggott pose like Solace of the Wind and it got the audience all laughing. And the intelligent use of a large roll of plastic that when moved gave the feeling of soft waves clapping. Who would have thought a roll of plastic could have such an effect? Julian also met The Collector (played by Paul Waggott), this weird man who wants Julian to find his mother's elephant ornament and speaks with a squeak in his voice (he was sucking air gradually out of a balloon to create the voice). Unsure where to find this ornament, Julian went in search through family members including Dennis (played by Aaron Cortesi - the same guy who played the Italian-speaking boss in play Good Night - The End which I saw back in September), his cousin who hides at home counting people walking into the cafe across the street from his window and a bit creepy in my books. With little luck, he engaged in the help of detective Joseph Grieves (also played by Aaron) and his dog Floyd (played by Paul). Paul did an amazing job playing the dog, sticking his tongue out, licking others and himself (the audience laughed!), growling and playing with his owner. Way too close to a real dog!

Then there's Yvonne Quinn (played by Sara Allen), a highly stressed waitress that often visits her sick grandmother, Sheila Quinn (played by Harriette Cowan) at the local Hospice. Harriette was so good in her role as an old lady, talking to herself constantly as if in dementia, walking in small careful steps and with a walking stick - I could actually feel the pain/fear of growing old in her. Yvonne, on the other hand, had a mind that runs a million miles per second (other performers were chanting numbers when Yvonne is thinking). Her days are a routine, getting up, taking a shower (the roll of plastic now became the shower curtain and towel), checking in on nana, going to work, praying, taking a smoke and back to bed. She meets Julian by chance when her nana disappeared from the Hospice and was found in Julian's apartment. Interestingly Julian took fancy of her but didn't have the chance to ask her out and she ended up in his dreams - the audience was enthralled with Julian's dream of Yvonne dancing sexily, seducing him (what the audience saw was just the shadow of Sara dancing but it was enough to bring all sorts of thought into our heads) but like all dreams, other thoughts crept in, including images of his mother when she was much younger.

Spectacular use of lights and shadows, very creative and cleverly put together. All in all an amazing play that will make you laugh yet enchant you. I HIGHLY recommend that you watch this play - you wouldn't want to miss this one!

The show ended around 10pm and coming out towards The Pitt Bar (bar in BATS theatre), we found a couple dressed up in 40-50's style clothing and playing music on a suitcase gramophone - Liviu and Ana were both so excited because the songs they were playing were very similar to the Romanian folk music. It was really cool to see how the gramophone work :)