It is WOW season again in Wellington and I'm SO happy to be volunteering as a programme seller again this year on the 2nd week of the show! Similar to last year, I had to work 2 hours prior to each show for 6 days selling programmes and in exchange, get a free ticket to the show.

Day 1 was a bit of a rush to get to TSB Arena after a busy day at work but just had to stop to take a photo of the City Gallery that is now covered with coloured dots (some exhibition must be on): 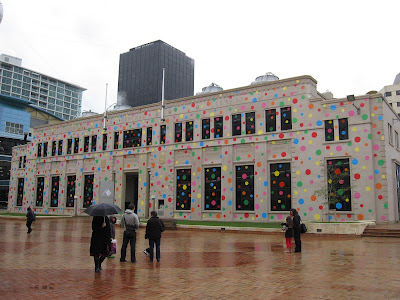 Looks quite bizarre! Must check out what’s happening at City Gallery later tonight…

Ooo, this year we got nicer shiny hats to wear and even a bag with goodies - a WOW crew t-shirt and volunteer pass which we had to wear when volunteering, a small bottle of water, a WOW badge and programme. Best of all, our names were printed in the programme this year! Yay!! It may not mean much for some but it's a sense of appreciation and recognition of the volunteers' time put in for the show. So awesome!

I was a roamer programme seller the whole week, walking around the foyer in the midst of the excited and cheerful crowd. Sold my 150 programmes every day from 6-8pm and still helped volunteers Tam and Kerry who were stationed at the foyer booth sell their lot. I love being a roamer, getting to mingle with the crowd and in between took photos of and with the pre-show entertainers who were out and about entertaining the streams of people flooding TSB Arena. There were a lot more pre-show entertainers this year - dancers dressed up a tui birds, Cupids, housewives, furry monsters, mime performers etc. So much fun watching them interact with the crowd and they never fail to make me laugh and smile. Despite having to work here after a long day at work, I feel uplifted and energised. Photos taken while working: http://www.flickr.com/photos/8070917@N05/sets/72157622539432712/detail/

I would meet at least 1 person I knew each day - yes, I do know a lot of Wellingtonians hehe...On Friday, I saw Frank Mount, a man of notable rank in Telecom and walked up to him to introduce myself. The poor man had no idea who I was (his face was blank) and I had to tell him how I tree up to him in the Telecom hierachy - you could see the sudden relief in his face. Friends Karen, Daemon, Scott and Hannah were also seen passing through during the week.

I also attended James' birthday drinks at Southern Cross on Friday and had a fun time dancing swing with the birthday boy as well as swing dance friends Daemon and Dan to band Wellington Heads. I'm still not very confident with my swing moves but the boys were nice and made my dancing experience a good one :)

Oh yeah, we volunteers at WOW get to attend the after-show crew party this year and the theme is Space. Sioned, the Merchandising Co-ordinator (all volunteer programme sellers report to her and I've worked with her too last year), insisted that us programme sellers attend the not-to-be-missed party. Sounds like a plan but when would I wear? Hmm...

Was up early on Saturday for a swim and caught up with Jonathan for brunch a Baobab Cafe in Newtown at 11am - cool little cafe which I've not been too. Nice food and a very relaxed atmosphere. We took the outside table and were entertained by a busker playing the guitar nearby as we enjoyed our meals, coffees and chit-chat. I enjoy my catch-ups with Jonathan and was disappointed to find out that he will be moving to Canada at the end of the year. I’ve only started to get to know you better and you’re leaving?! Hmm, we’ll have to catch up more often before you go!

Headed back into town to meet Scott after brunch to swap photos from our trip at 1pm and was telling him about my make-up dilemma for the space costume party I'm attending on Sunday - I have an idea in my head of the futuristic look to suit my silver dress and white boots I rented from Costume Cave for the party (the costume is kind of a blend between a 60’s go-go dancer and Barbarella) but wasn't sure how I was going to get it done. Scott was nice enough to offer his face paints and even did a few test runs on me, making me look more like a panda than a futuristic bombshell haha!

Tam and I went to see the show tonight at 8pm after our volunteer work and I must say, it wasn't as impressive as the one last year, kind of didn't end with a big bang. This year's show was hosted by the Topp Twins, NZ's folk singing sister comedy duo playing their various characters on stage. There were lots more dancing this time and they had a Man Unleashed section which as the name implies, showcased men with to-die-for bodies in all sorts of artsy costumes. And they were quite a tease too, doing the whole cowboy hip wiggle dance at the crowd along the aisles! The organisers at WOW must have heard about the man drought in Wellington and brought so many together in one show :P

The winner of the Supreme Award this year was an entry from Alaska. I wonder how did he ship the dress made of wood in one piece to NZ...The costume entries are always impressive and creative. Mum should totally submit an entry - these sort of creative arts is so her thing! The show is 2 hours long with no interval so make sure you head to the WC before you get to your seat for you do not want to miss a single bit of the spectacular show! I'm glad tomorrow is the last day of WOW – it has been an insane week and though I've had fun, I do want to get back to routine and catch up with sleep.

Sunday was the last day of the show and I volunteered from 3-5pm then rushed home to dress up for party. Had to get Priscilla to help tie a high ponytail for me with the aid of Andy’s hair gel to prop it up. Shall be good fun when washing the thick layer of hair gel off my hair later tonight…Walked over to the party at Temperance Bar at 8pm – the whole venue was booked out for the private function! 3 floors all to ourselves!! The place was decorated to suit the space theme with an inflatable tunnel set up from the entrance to the bar and the venue ‘smoked up’. Even the bouncers at the front doors were donned in Star Wars costumes haha! The party itself was awesome with the majority of the crew dressed up in costumes – Star Trek characters, aliens, space cadets etc. One of the dancers wore a costume that had small canvas blocks hanging on his top – the blank ones are for you to write down your number so he could call. How very creative (and cheeky)! I almost couldn’t recognise Carrie who was a blue Smurf-like space cadet. Great job, Carrie!

Tiara Hymen (a pre-show entertainer now dressed in drag) was the MC for the party, whizzing around in her (or his??) roller skates, pouting her lips and posing for cameras. Finger food was served throughout the evening and each person is entitled for 2 free drinks at the bar. The party kicked off with thank you speeches from the organisers, a best-costume competition, followed by dance performances by the WOW dancers (damn, the boys danced more femininely and sexily than the girls!) and singing. We then had a DJ playing lots of cool dance tunes – my new friends and I had a ball jumping up and down on the dance floor, laughing at some of our silly antics and photos.

“Are you gay?” asked hottest-looking male dancer I’ve seen tonight. What??! Not sure if I should feel offended by the comment or it was a joke but that was not an ideal opening line when trying to get to know someone…he just dropped several levels on my hotness scale…

Looking forward to the next WOW!