Was up early today and made myself some pancakes for breakfast, then headed over to Christian's place at 11am for samba gafieira dance practice. He has got several instructional dance DVDs by Brisbane-based Brazilian samba gafieira teachers, Kadu and Larisa, and we would work through the steps in the DVDs during our one-on-one dance practices. Not many weeks left before the class comes to an end with Christian leaving for England. We will miss him dearly :(

I couldn't stop laughing at his hair today - I was greeted at the door by a Sam Wheat (character played by Patrick Swayze in Ghost) lookalike! Apparently this is what Christian normally looks like in the morning if he had washed his hair before bed at night. Haha, I just had to tease him :P

Rush, rush, as usual...Headed home, whipped up something quick for lunch and got picked up by Liviu at 2pm for our day trip up to Palmerston North aka Palmy. Jonathan is performing in the Miss Saigon musical currently running in Palmy and we are heading up to show our support. Plus I've never been to the Miss Saigon musical and have always wanted to go watch it - this is one opportunity not to be missed! But before heading up, we had pick up one of Jonathan's mates from Northland. You would not believe how small the world is...Round and round, Liviu was driving in search of this house in Northland and we ended up right in front of Joel's flat to pick him up! Oh, Liviu, you could have just told me it was Joel we were picking up because I know where he lives!! Life sure has its interesting twists and random occurences - I'm the one who knows both boys from different social networks and we are gathered together because we all know Jonathan. Ha!

It was a fun drive with the boys though given we all work in telecommunications, most of the topic of conversation tend to revolve around work especially those 2 boys, who just couldn't stop comparing how good/bad their mobile phones perform and the constant Googling the internet for information about the musical and cast, ON THEIR PHONES! Tsk, tsk...

Stopped at Foxton around 4pm to grab some fish 'n' chips at Seabreeze Takeaways then headed to the nearby beach to enjoy our late afternoon snack. I got to agree with Joel that the crumbed fish tasted very good - well worth the stop if you are driving through Foxton. Photo of the beach taken from where we were snacking: 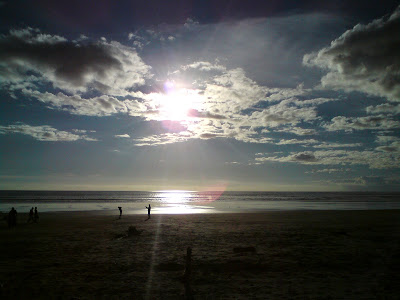 Around 5pm, we continued on our journey and arrived in Palmy at 5.30pm. Palmy is well-known as a student city as it is home to campuses of Massey University, Universal College of Learning (UCOL) and International Pacific College, and the students make up for nearly half the population. The three of us took a short walk around The Square, a 7-hectare park of lawn, trees, lakes, fountains, and gardens in the centre of the city. Hmm, I don't remember the place being so 'open' - if memory served me right, The Square used to be covered by trees, making it quite eerie and unsafe to walk through during the night. But it is now all brightly lit and clear of huge trees, making it a nice park to visit :)

Went to pick Jonathan up at 6pm and us four had a nice dinner together at Bangkok Thai Restaurant before dropping Jonathan off at The Regent on Broadway for him to get ready for the show. The rest of us went to The Fish Cocktail & Wine Bar located next to the theatre for a pre-show cocktail. Thanks Joel for shouting this round! The bar was rather small but has an air of class and cosiness - I like :)

Around 7.30pm, we went to the theatre to find our seats. Liviu had very kindly helped bought the tickets online which cost $40 each - they were the only tickets available, stall seats i.e. on the ground floor, 3rd row from the back. Thankfully the seats were raised so we still had quite a good view of the stage. Wow, I didn't think the theatre would be full house tonight given that it's a rugby night and this is Palmy after all. They show has to be real good to attract such a crowd - I'm SO excited!

Miss Saigon is a modern adaptation of the opera, Madame Butterfly, which similarly tells the tragic tale of a doomed romance involving an Asian woman abandoned by her American lover. Wow, I'm totally blown away by the the show. The singing and acting were absolutely impressive! The lead role of Kim (Vietnamese bar girl) was played by American actress-singer, Melinda Chua, who plays the lead role as Kim in productions in the USA. A small-sized Asian girl, she has such a powerful and beautiful voice - I was totally in awe. Palmy is very fortunate to have her fly down to a small city for the production. I wonder if she knew what she was getting herself into when she said yes to come down to Palmy...hehe...

We also got to see Jonathan on stage who had a small acting part in the musical, playing the saxaphone on stage in the nightclub (he and the rest of the orchestra were 'hidden' in the pit from view). The story had a sad ending where Kim killed herself after giving her son, Tam, over to Chris (the American GI she fell in love with and father of Tam). Speaking of the character Tam, the little boy who played the role did so well! He didn't have a speaking role but for someone probably age 7 or younger, he acted so well that it melted the hearts of the audience, just watching him run over to hug Kim. Another very well-played character was of The Engineer, this man who ran the nightclubs where Kim was working at - a sleazy man yet comical at the same time.

The whole set up the scenes were fantastic - the colours, dance routines (that woman pole-dancing definitely caught my attention), props and even the helicopter looked as if it really did fly in from the night sky. I totally did not expect such high standard and quality of a production in Palmy and I'm SO glad I made the trip up to see the musical - you MUST check it out if you live in the area!

The show ended at 10pm and we were back at The Fish for another round of drinks, this time my shout. Tagged along with Jonathan to the after-show party at Abbey Musical Theatre where the cast were all chilling out with family and friends over cheap drinks. Chatted with a few interesting people while I was there, including this one man who cracked me up laughing for he was showing off his Michael Jackson dance moves and pretending to flamboyantly flirty with me. I had to get Jonathan to plonk himself next to me so that Mr I'm-So-Hot (but really he's not, really) would stop his 'sexy' dancing at me :P

Would have loved to stick around longer with Jonathan but us 3 had to start heading back to Wellington. Left Palmy around 12.40am and arrived 2.40am. Yawn, it has been a long but wonderful day out with the boys :)