Was up at 6 this morning and tagged along with mum, dad and Mama to see Urut Man around 7am at his home in one of the suburbs in town. The Malay word 'urut' translates to 'massage' but I'm nicknaming him Urut Man just because I can't think of a better name for him. Everyone else just calls this Chinese healer 'shi fu' in Mandarin (which literal translation means 'master' in English).

I'm not sure if he's a real genius or bogus but he's said to be a healer for all ailments and there were about 7 or 8 others ahead of us...AT 7AM!! The thing about Asian culture that sometimes puzzles me is their beliefs in mythical things such as deities, gods/goddesses, mediums etc. rather than scientific evidences. Yet when questioned of such non-scientific beliefs, there is no explaination of how or why someone can be healed by just a mere touch on the head. Strangely enough, there is a trend and Urut Man seems to be the 'in' thing for my family at the moment.

Anyway, I spent my waiting time observing the magic man carry out his healing. It was rather strange to sit and wait with 10+ others in his covered porch, watching and listening to him while he attended to each of us - yep, no private room to have your one-on-one session with Urut Man but in full public view. His Mrs was yakking away obnoxiously with some 'patients' and I was surprised to find out that 'patients' came from as far as Singapore to see the man. Even the Malays come to seek him for help.

Mama tells me that it's a god/deity at work using Urut Man's body - how else would he be able to tend to so many people in a day? The idea of an unknown being making use of a human body to perform its work sounds somewhat creepy but my grandma does have a point. He ain't a human machine. He performs the same standard procedures on all the 'patients', asking you to first relax and beginning with a back rub followed by placing his hands on the head (a means to pass through 'energy'??). He continues on massaging your hands, then pours some Minyak Angin Cap Kapak (literally translated as "Oil For Wind Axe Brand", an oil popularly used by Malaysians as the best medicine for nausea, colds, headaches and stomach-aches) on his fingers and proceeds to pinch and briefly puts pressure on the upper ear lobes. Next, he pours some liquid that looks like cooking oil (but doesn't smell like it) and rubs it on both lower legs, massaging them, then pinching your toes with his nails (ouch!). And then he does this chiropractic spine adjustment (I've my doubts of this since he's not a health professional), followed by nudging your knees to bend your leg (you'll have to stand against the wall for this) and elbow massage the butt. And he repeats the whole thing again with the next person. As he carries out this routine procedure, he would be giving you health advice (such as what you can or cannot eat) as well as getting involved in chit-chat with other folks.

I was told that I have a spine disalignment which was the reason behind my tingling and slightly numb left leg. How very clever - I didn't even tell him about my MRI scan or back injury! He assures me with 1-2 visits, I would be all fine. Hmm...

Oh, and you DO NOT want to have throat infection of any kind for he will put two fingers into your mouth and you are not to wash your mouth after (he will wash his hands after but he didn't wash them prior to putting them into your mouth AND he had been massaging several people beforehand!!). Dad had the privilege of Urut Man's 'special' treatment - eww!

Cost us $10 each which you would pay in form of a red packet i.e. you don't hand him the cash directly but put inside a red packet similar to those used during the Chinese New Year festival. Oh yeah, he has this old towel tied around his waist which looks odd but we all suspect is a must-wear, just not sure what its purpose is for. Photo taken of Urut Man at work on my mobile phone: 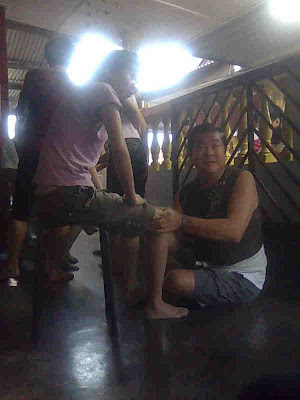 Left the place at 8am for breakfast with mum and Mama (dad had already taken off for work) at Gerai Selera Rhine behind the Telekom building in town. The folks at the stall knew most of my mum's side of the family for we have been long-time customers back when they had their stall on Jalan Rahmat. During my highschool days, I used to pop by their old stall in the afternoons after tuition classes to buy takeaway tea for mum and her office staff. Couldn't believe they could still remember my uncles' names! I had 2 roti canai for breakfast with a nice, warm teh halia (ginger tea) - cheap and yummy :)

Dropped Mama home and then stopped by to visit 3rd-yi po (my nanny when I was younger; also Mama's 3rd elder sis). I feel sad seeing both of them growing old and now reliant on others on tasks they once used to do so easily and independantly - Mama now needs someone's hand to hold when walking while 3-yipo is confined to her house ever since she had a bad fall and broke her hip (3rd-yi po used to cycle everywhere in town but now walks very little post-surgery). I don't know why but growing old scares me? I think it's the inability to do the things I want to do whenever I want to and being totally dependant on someone that is what scares me. Looking at them just makes me even more aware of my own age and the many things I still want to do in life. No time to waste!

Mum's friend, Auntie Swee Lian and her daughter, Maggie came to see us and we had mum's homemade cake together during afternoon tea - she's an old friend of mum's and both women had watch their daughters respectively grow up since young. I vaguely remember Maggie; all I could remember was she used to take over the clothes I've grown out of and now she's in Taiwan at uni! Eeks, which again reminds me I'm getting older! Photos taken this afternoon at home: 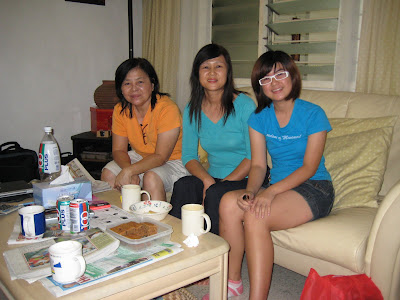 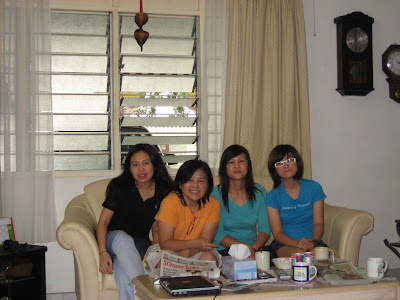 Group photo of the mothers and daughters


Rest of the day was pretty much spent catching up with sleep, had a home-cooked meal for dinner (how much I've missed them - bless my mum!) followed by coffee at Old Town Kopitiam with mum and dad. Yawn...despite the caffeine, I'm still sleepy...