Had a full day conference at Westpac Stadium on Friday. A good change from the usual office day and was quite informative - the conference was focused on introducing the key heads of departments under our bigger umbrella and what the new restructure looks like. It was a full day of talks with meals provided in between, including a team building event in the afternoon followed on by a few more talks and after work drinks.

We were very fortunate to have guest speaker, Mark Inglis, come by to talk about his struggles and how he overcame climbing up Mt Everest despite being a double amputee. Very impressive stories of his past and I admire his attitude of not easily giving in to pain and the challenges he had to face in his life. He is a man of many successes, not just the first double amputee to climb to the summit of Everest, but also a researcher, winemaker, former Paralympic cyclist and now motivational speaker. There were some controversy in the news back in 2006 of his Everest climb - he was criticised for leaving distressed British climber, David Sharp, to perish while he pushed on to climb to the summit. Frankly, I think he made the best decision he could at that time given the circumstances - at that high altitude, it was each man to his own. I'm looking forward to read his book Legs On Everest - everyone at the conference received a signed copy of the book :)

The team building event this time was one where we had to paint a picture on a panel and when all the panels are put together, it'll create a bigger, meaningful picture. We were divided into 3 large teams (Red, Yellow and Blue) and further split into 8 smaller teams - each team had a picture given to them which they had to draw up on canvas and colour it. The team that has alignment of the drawings and colours that matched the closest when all the panels are put together will be deemed the winning team. There were lots of talks and discussions about what colours to use and the distance of this and that - all fun and games and we only had 1.5 hours to complete our task. Photos taken of our painting: 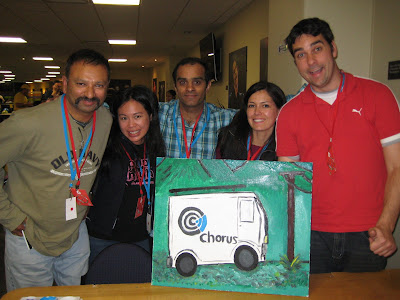 Ashvin, me, Sridhar, Camila and Jeremy from Team Red 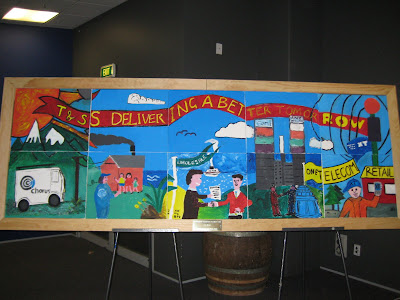 
Thought Team Red didn't win, I think we did an AWESOME job :)

Didn't stick around for after work drinks as tonight was also Dvita's farewell drinks so rushed home to shower, change, have dinner and out again to the Malthouse to meet up with everyone. The day has finally arrived and our princess is heading back home to India. Sobs...will miss her lots...will have to keep in touch, my dear! We spent the night doing a pub crawl to Dvita's favourite pubs in town - had several drinks at the Malthouse with friends (I too flitted around catching up with people), then moved on to Mighty Mighty for a bit. Photos taken at the Malthouse: http://www.flickr.com/photos/8070917@N05/sets/72157620665979358/detail/

James and I were being mischevious spreading rumours of our own and left the others at the Malthouse, went back to the office to collect some things and only met up with the gang some 30 minutes later. Folks like Dvita and Scott were texting me, asking where we were and naughty James said to text back that we went back to his place and got somewhat distracted. I later had Scott come up to me asking if there was something going on between me and James - hahaha! Hi-5 James, someone fell for the trap!! Had my last drink of the night here at Mighty Mighty. Cost me $25 for a vodka and coke, and a Mojito for James and I - bloody expensive!

By the time we were in Mighty Mighty, I was already feeling tired and ready to head home. Several people were wasted (you can tell from their slurred speech and inability to stand properly) but they were still on the roll and continued on to Watusi on Edward St for more drinks. I was there very briefly and left for home about 12am - couldn't keep my eyes open any further.

Was up at 8.30am on Saturday to bake mum's orange carrot cake for Jane's potluck dinner tonight. It was Jane's birthday and she had gathered the gang to have dinner at her place. I had better bring along the cake this time or else I'll hear no end from Erwin - it's his favourite cake and I've not made it for the last couple of potluck dinners :P

Went out for another Zouk workshop (cost $25) with Futa at 11am at Te Whaea - as usual, there was a serious lack of male leads so the girls had to share them during the 2-hour workshop. I'm not going to name names but seriously, boys and girls, when you want to learn a dance that dances this close, please make sure you shower and use deodorant/cologne/perfume. It is an important dance etiquette to adhere to. Can you imagine how suffering it is to put up with someone with a body odour and having to dance chest-to-chest for 2 minutes long? It feels like an eternity of stink! I can still smell it up my nostrils now that I'm blogging about it!! Sheesh...Photos taken at the workshop: 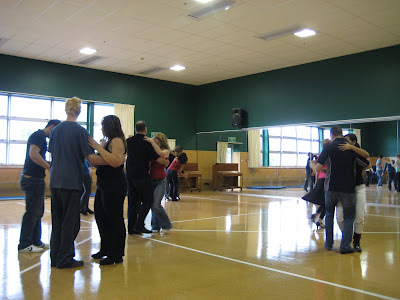 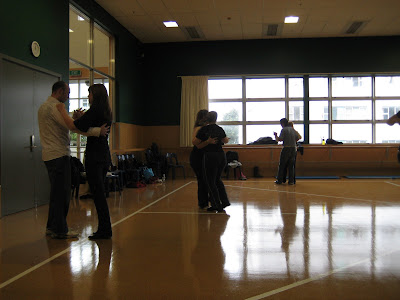 Left at 1pm to put out more flyers. Yes, I gave in and agreed to put out another set of flyers for Dan. Hmm, the sky looks rather dark - hopefully I can put most of them out today...There are actually some quite nice houses hidden in Mt Victoria though I've also seen others that makes me wonder if a witch lives in it (so shabby).

F*&K!! What a rotten day - must have accidentally stepped on some dog poo while putting out the flyers and my car stinks! Already having a super busy day and now I've to wash my car. ARGH!!

Headed over to Newlands to Jane's place about 6pm for dinner. Wow, our birthday girl sure can cook - she made so many yummy Malaysian dishes for us. Hmm, maybe I should consider finding myself a nice Kuching girl instead hehe...Erwin's very lucky to have a partner like her :) Oh, and they have these gorgeous ragdoll cats, so fluffy and nice to cuddle, and well-trained too - I've never in my life seen cats do tricks when told to do so. They would sit, stand, roll and even come when called to by their owners. Impressive! How very fascinating to be able to train a cat!

As we always do, we ate and drank so much and laugh lots. Uncle David and family came to join us much later as they've just returned from a day trip up the mountains. Erwin was really funny - he needed to get another wine glass for Uncle David and the glass was stored high up the cupboard. I happened to be in the kitchen drying the dishes and saw him looking left and right for a chair, then stopped and looked at me (I could see the imaginary glowing lightblulb by his head). Next thing I knew, he picked me up so I could grab the glass for him! Erwin!!!

Left for Wellington City about 12am. Another late night for me...yawn...have to start packing my stuff for my trip home next week later today...