Started my day with Bikram Yoga at 6.30am this morning. Nicki was the instructor today and was very different to Glenda - she talks as if trying to sell something in an auction! Felt rather stressful, I must say but glad to get exercise out of the way as I have a busy day ahead.

Took my colleague, Kirsty, out for lunch at Caffe Lafarre - it will be her last day working with us tomorrow and we would all miss her dearly. She's like a mum to us at work :) It was quite unfortunate due to company hiring policies that her contract was not renewed this time round (which made me rather thankful that I'm a permanent staff though that doesn't necessarily guarantee you a job during recession time). I would definitely miss her presence in the office - best wishes, Kirsty, and keep in touch!

Back to work and had a Skype video chat after work with Helbert and his mum. Ah, the world of technology - we could talk, laugh and see each other even though he's in Brazil and I'm in NZ. Isn't that cool? :) Helbert and I try to chat on Skype every fortnight just to keep each other updated on what's been happening in our lives. I miss him heaps and vice versa but he's very happy in Brazil and not planning to come back to NZ any time soon. Plus he's now seeing someone nice so I doubt he'll come back soon anyway hehe...His mum was speaking to me in Portuguese, asking if I was attached. I couldn't respond in Portuguese so had Helbert translate for me (I could understand his mum fine, just not speak the language well). "Why are still single? It's winter, my dear - you have to find yourself a man to cuddle and keep you warm!" said Helbert's mum and I laughed. Told Helbert to tell her I wished I had a man but couldn't find one and that I may have to put up an advert in the papers since winter is coming soon and I could see her loll her head back, laughing away. It was rather endearing to be in such good friendship like this with Helbert and his family, despite all that has happened to us in the last 3+ years.

Whilst I was chatting away with my Brazilian family, Rosel popped in to see me, bringing along a box of homemade slices. She's always bringing me food! I would marry her if I was a guy :P Came along with me to my samba class but she didn't stick around for the lesson. Samba class tonight was hard work, mostly focusing on our abs, doing crunch moves and lots of it. I could feel my ab muscles cramp...

Rush, rush, rush as usual. After class, I took off to Osteria del Toro on Tory St to meet up with Stacey and gang for dinner before we headed to another Best of the Fest. We had such a fabulous time last Thursday so decided to do another round tonight. This was also the 2nd time I'm having dinner at Osteria - my first experience was bad, if you folks recall, where the paella I shared with Hew's friend had way too much salt in it. But I was willing to give them a 2nd attempt and tonight, had the Fatima Lamb, slow cooked lamb tagine with raisins, Moroccan spices, carrot, garlic and onion, with a side of Moroccan couscous - yum! Willy-John and Esther shared a HUGE goat dish (check out the photos)!! Of course, we had drinks accompanying dinner - I had a glass of sangria which I shared with the girls. Hmm, the sangria still needs work. Can't taste the fruits in the drink! More pounding of the fruits required, or preparing them overnight.

We chatted, caught up and laughed over our meals. We weren't really thinking of dessert so when the waitress came over and began asking the boys if they wanted any, they said no thus everyone followed suit. Human beings are funny creatures and I was saying to the people sitting around me how just because the first person that was asked said no, the rest of us who were unsure whether or not to have dessert also said no. I suppose there's a fear and shame aspect that if you were the only one eating, everyone else had to wait and stare at you so it was better to conform than not. From the corner of my eye, I could see the cute Chilean head waiter whispering away at the waitress, as if to say "Watch me - this is how you do it" and he walked over to the girls end of the table, with menus in hand, asking us if we were really sure he couldn't tempt us with dessert. Half the table ordered dessert and the trick to it all is to ask the ladies instead of the guys. Clever but I saw through that (and I think he knew I was telling Stacey exactly what he was up to when he headed to our table). They had panne cota on the menu - I just had to try it. I LOVE panne cota! The one served at Osteria was a Vanilla Panne Cota with pinot gris and poached fruits. Presentation, not so great (too much whiteness in the dish, making it rather nauseating?) but tasted fabulous. Photos taken at dinner tonight: http://www.flickr.com/photos/8070917@N05/sets/72157618210129329/detail/

Left for San Francisco Bathhouse around 9.20pm and the line into the bar was already so long. Check out the queue: 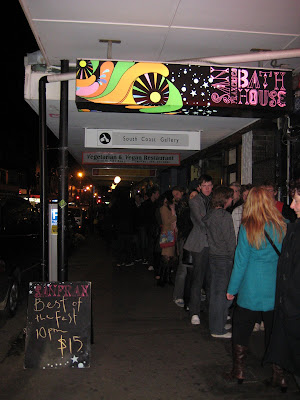 Bumped into Ron in the line and boys Scott and Willy-John decided to ditch the girls and joined Ron's group since they were slightly ahead of us. "You boys sure you'll be able to get us a table?" I teased and went back in line with the girls. Cost $15 door sales like the last time.

Hmm, we probably should have skipped dessert and headed over earlier. The boys weren't able to secure us a table so we stood through the whole show. Tonight's line up were mostly local NZ comedians, with Dai Henwood as the MC. We had Cori Gonzalez-Macuer, Steve Wrigley and Jim Brown for the first half. Cori was rather expressionless, taking the piss out of dumb blonds and doing this dialog of 2 silly NZ TV presenters which wasn't really all that funny (perhaps it would be if I was drinking?). Steve Wrigley, he was the guy who always wore a bandana, and the 3rd guy, Jim, was so-so.

On the 2nd half, we had Te Radar, Benjamin Crellin and Glenn Wool. Scott and I both thought Te Radar spoke way to fast for our comprehension while Benjamin reminded me of a just released prison convict, head all shaven and those seedy eyes. Interestingly, I couldn't remember any of his jokes...guess I wasn't paying attention...Glenn was the only international comedian this evening. Ok, I get it that at late night comedy shows, comedians normally drop down their guard a bit and drank alcohol as they carry out their acts but Glenn was getting a bit aggro when he got heckled by people in the crowd. The show didn't get any better as the night went on and the comedians were just dragging on. Scott and I took off around 12.30am before the show even ended.

I'm not sure if it was because I didn't grow up in NZ so couldn't find humour in most of the jokes, or the fact that my legs were so sore standing for 90 minutes but I didn't really enjoy tonight's show. In fact, I cringed a few times when the comedians made jokes about the Maori people (I wondered how Willy-John took it since he's of Maori descent). I guess I was disappointed after having seen such a great show last week and this time around, we had a bigger group and was really looking forward to an awesome night out. Hmm, not sure if I would do another round of Best of the Fest next Thursday after tonight...