In the last 2 Easter holidays, I've always been immersed in the 3-day long salsa congress; this year, I've decided not to partake in the event and neither take a trip somewhere. Well, I don't have enough leave days from work or the funds for another trip. Hmm, would be nice to go somewhere warm and away from the cold weather here though...

Friday was spent at home, cleaning up my room and posting up all my unwanted stuff on Trade Me for sale. I still live by the rule 'less is best' because who knows when I would be moving again and it's such a pain to move when you've got so many stuff! It sure felt odd staying in when most of my friends were in salsa workshops or travelling somewhere...

"Are you already danced out after day 1??" I laughed when Damien suggested we grab dinner and watch a movie after at Paramount Theatre tonight. He's one of the salsa folks that had been in workshops at the salsa congress today. He had initially planned to cook for both of us but the shops were closed being Good Friday and we couldn't get any foodstuff so ended up having dinner at KK Malaysian Restaurant instead. Ooo, it has been such a long time since I last went to KK - let's go! I used to frequent this cheap and tasty Malaysian restaurant when I lived on Taranaki St. Had their Wa Tan Hor (flat rice noodle in egg gravy) tonight while Damien had their Hainanese Chicken Rice. Both quite nice but I still like my Wa Tan Hor served with pickled/vinegar green chillies, which is something I can never get when I order Wa Tan Hor in the food places in town. Boo...

Quick stop at Paramount Theatre to grab our tickets to the movie Gomorrah, one of the many movies shown as part of the World Cinema Showcase 2009, then a hot drink at our supper hang out place, Momo Tea. I tried their hot Taro milk tea with mixed jelly and bubbles - yum! Damien had a Lemon Honey tea that we both agreed was nicer cold than hot. Have to come back here again next time to try their other dishes. Seeing the dishes served to the other tables, the food looked so good.

The movie Gomorrah is based on the Italian mafia world - lots of violence, assasinations, corruption, drug use and the like. A cross between movies The Godfather and City of God really. Interesting but leaves you feeling a tad sad leaving the cinema. Headed home around 10.30pm and was in bed by 11pm. Thanks for the night out and I'll see you tomorrow at the salsa party, D!

Saturday was another cruisy day - went to the gym and did a few errands in town. Around 7.30pm, I caught up with Rachel and gang for dinner at Restaurant 88 on Tory St. This was my 2nd time here at this upperclass Vietnamese restaurant. We were a large group of 10 tonight - me, Rachel, Debs, Alice and her friend, Colm, Ellen, Jemima (Colm's friend who's new in town), Flo and Scott. I wasn't feeling too hungry so just had their entree fresh Vietnamese spring rolls for dinner. Cost $12 for the entree that was filling enough for me as a main. Would have loved to stick around and catch up with the gang more but Colm, Jemima, Scott and I all have tickets to the salsa show and party at Wellington Town Hall tonight (and we already missed 1.5 hours of the show!) so had to leave ahead of the group. Catch up with you folks again soon, I'm sure!

The International Salsa Showcase and Salsa Party cost $55 and free for those who have a full salsa congress pass. This year's show is titled The Salsa Saboteurs, a strikingly original theatrical experience that combines dance performances with the amusing tale of three schoolboys whose affinity for wrecking Salsa events takes them on a trip around the world they would never have imagined. We got there in time to see the Brazil performance where they did samba gafieira, samba carnival and zouk dances. Watching the performers carry out aerial moves in their samba gafieira performance reminded me so much of the days when Helbert and I were practicing such moves. Hmm, pity he's no longer in town and no salsa dance school in Wellington teaches gafieira or aerial moves. Hopefully after this congress, such Brazilian dances would be more popular in town.

To show itself was alright. 50 plus world class dancers from across the world performed tonight, showcasing many different dance styles. I guess most people were really interested in the international dancers' performances, not so much of the theatre which made the whole show felt dragged on for too long. The salsa party only started at 11pm - Scott and I were feeling rather tired and the party hasn't even started yet!

Andrea was back in town for a few days and OH MY GOD, just look at her hair! She had it cropped short in a platinum blonde colour. Very sexy, my dear! It was so nice to see her in person - you've been dearly missed!

I flitted around the dance hall, dancing to leads from out of town and also our own local Wellington boys, catching up with friends and getting cups of water from the water fountain in the main foyer in between dances. It was great to find zouk music playing in the main foyer and dancers showing of their swaying moves on the dancefloor. I would love to learn zouk - looked rather sexy, all those head/hair flicking. I like!

My little black cocktail dress keeps riding up! Probably caused a few eyes popping out and had to put in sexy moves just to pull the bottom hem down haha! Had several awesome dances, where I felt as if zorbed into another world or had an audience watching me dance. How I miss performing...Photos taken at the salsa party tonight: http://www.flickr.com/photos/8070917@N05/sets/72157616640992924/detail/

Caught a ride with Alicia for home when the party ended at 2.15am. That was some 3 hours of non-stop dancing I've done tonight! Wow...I'm glad I came to the party - got to catch up with friends (mainly Andrea) and danced enough to make up for all those salsa events I've not been attending in the past year! Even felt ab cramps at the end of the night - obviously overdid those body roll, crunching and hip movements on the dancefloor. Hearsay that the next salsa congress will only be held in 2011. Must be sad for the salsa enthusiasts since this has always been an annual event. They still have 1 more day of workshops tomorrow and another party - dance your socks off, people!

It sure is quiet at home with my flatmates away...Slept in Sunday and caught up with Adrian around 3pm for a cuppa at his favourite coffee place, Cubita. We are such regulars there that owner John already know our faces and names :)

After coffee, we strolled over to Te Papa to see the Monet and the Impressionists exhibition which was running from 14th February to 17th May. It was the largest and richest collection of Impressionist paintings ever to come to New Zealand and a rare chance to see over 50 paintings from one of the world's finest collections of 19th-century French painting, held by the Museum of Fine Arts in Boston. Cost us $15 for adult admission per person to the exhibition and an extra $5 for the audio guide each. Spent around 1.5 hours walking around the gallery, listening to our audio guide (which was like a phone) while admiring the works of these French artists.

Frankly, I'm not a huge fan of impressionist art perhaps because of their faint, shadow and light type paintings, thus not having bold lines or a clear focal point. Still, this was something I've not done before and like Adrian, I'm open to new experiences. Another first for me! My favourite painting would have to be 'Meadow with poplars' - just looking at the painting, I could feel as if I was in the meadow, smell the grass and wild flowers, see pollen flying in the air as the nice breeze blows by. Hmm, very soothing, very calming...

Standing in the gallery just watching people walk by, it reminded me so much of my time in USA where I would spend a whole day in their world famous museums such as The Met. Since young, I've always dreamt of one day being in this particular moment, me all dressed up at an art exhibition in company of like-minded people. I stood there in the gallery in awe and lost for words. I AM living that dream right now. Wow...And in good company too :) Thanks Adrian for having me tag along!

Have you seen the Colossal Squid yet? You should go have a look. Pretty gross really seeing the largest invertebrate in the world, this monster 495-kilogram squid, dramatically lit in its six metre-long tank. Can you imagine how many calamari rings you can make with this fella???!!

I can't believe the long weekend has whooshed by and it's now Monday. One more day of rest before the daily grind starts again. It has been a good and productive weekend for me - I did so much both at home and with friends :)

Oh yeah, I've been working on my photo collage project for the walls in my room for awhile now. Started the project a couple of weeks back as a way to remind me of all the awesome times spent with family and friends both abroad and in NZ. Gives me happy vibes when I see the photos :) Still a work in progress but thought I should share with you what I've done so far: 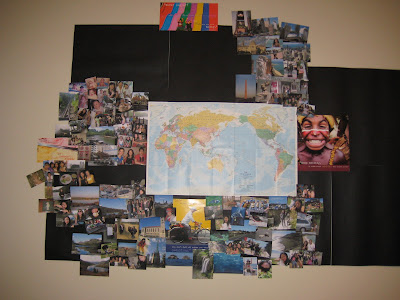 Photos of my travels around the world 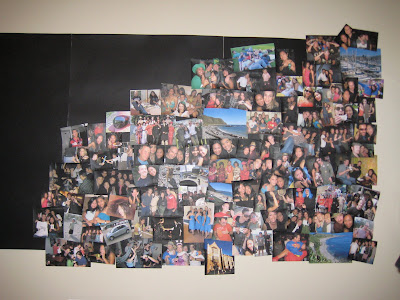 My vibrant life with friends in Wellington