St Patrick's Day is an annual festival on March 17th that celebrates Saint Patrick, one of the patron saints of Ireland. Widely celebrated but not as a national holiday (except in Ireland, of course), celebrations are generally themed anything Irish - wearing green coloured clothings, drinking Irish Stout, Irish Whiskey or Irish Cream and even eating Irish food. Here in Wellington, even me, a non-Irish, took the opportunity to get out and celebrate the day with friends :)

My day started off at 6.30am at Bikram yoga class. Seriously, I still carry sleep deficit from my weekend away and SO wish I could crawl back to bed for another hour but I've promised Sam and Tama that I would turn up to class so am sticking to my guns. It's become a fortnightly thing us three would do on Tuesdays - we would all agree whether or not to go before we knock off work on Mondays and it's really good motivation for us. Can't make excuses not to turn up in those best sleeping hours when we've made a pact! Besides, it was better to get exercise out of the way because it's a long day ahead!

The BIGAS boys organised lunch at our regular lunch spot, Great India today. No extra points for guessing right, the boys had a pint of Guinness each to celebrate both St Patrick's Day AND our Irish boy, Sam's birthday. To the many great times ahead - getting younger every year, Sambo! ;) Lunch is always $10 here with our choice of curry, served with a selection of naan and rice that we share in the group. I had my usual medium-hot Chicken Madras. It is quite funny how we order our curries - everyone has to send their preference of curry and 'hotness' level to Ashvin in advance so that he can inform the kitchen ahead of time and skip the wait ordering at the restaurant. He's got 'inside connections', you see...oh yeah...Photos taken at Great India: 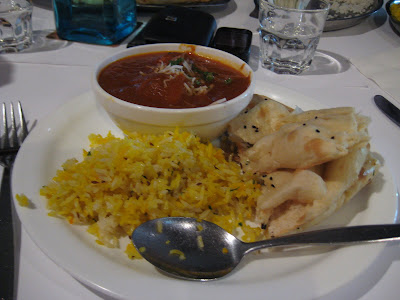 My lunch, Chicken Madras with naan and rice :) 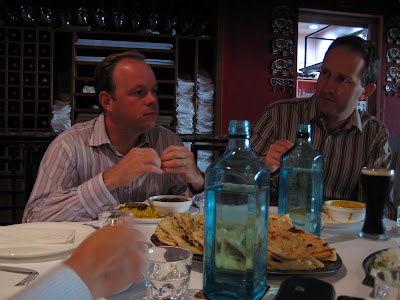 Peter (with a mouthful of food!) and Darren 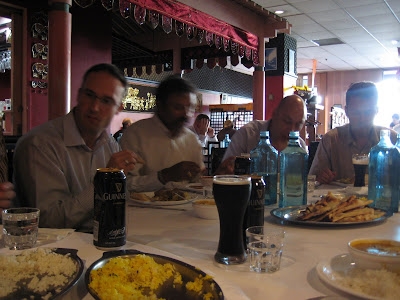 It's Tuesday, I know, but we just had to celebrate St Pat's and Sam's birthday


Quick stop for me to the $2 shop nearby to buy a "Kiss Me I'm Irish" badge to put on for the rest of the day. I know I'm not Irish but I just had to try my luck and see how far I get with it ;P Colm taught me some Irish sentences to practice and put to use. Here's what he taught me:
Angelica is anim thum (Angelica is my name)
Is moith liom buchail deas (I like nice boys)
Is moith liom pog (I like kisses)
Is misha caleen gealic deas (I'm a nice Irish girl)

I laughed at my desk reading his email went he gave me the translations - haha! Awesome! Going to write it on a little sticky note and pull it out if I needed to later tonight. Hehe...

Caught up with James at 5.30pm after work and we walked over to JJ Murphy's to meet his mountain bike buddy, Simon, for a few drinks. Wow, the place was packed inside and outdoors! We were fortunate to find a table with a bit of an outside view, drinking our Irish beers, Murphy Red (hah, the bartender told me I am a woman of good taste when I ordered us Murphy Reds!) and stouts. We chatted over all sorts, from our lives to Simon and his many piercings, laughed so much, even ogled and tried taking a photo of this man with man-boobs (eww, that's disgusting Simon!). Geoff came to join us for a couple of beers and Claus briefly caught up with me over a drink. Wellington sure is small - found George and his friends around the bar and had a short catch up as well!

Hey, my badge is not working! My scorecard for kisses is still a big fat zero! I think I had to be more obvious and flash my badge around...my hair is kind of covering it...hmm...

Around 8.30pm, I left Geoff, James and Simon at JJ Murphy's to go grab a bite on my own. I had to eat something - I just couldn't continue drinking like the boys :/ Catch you boys later! Aww, so sweet of James and Simon to add 2 more kisses on the cheek to my scorecard - you boys are so cute!

Stopped by at Momo Tea (ah yes, the regular supper place) and texted Damien to come join me, Colm and gang at Molly Malones for a few beers later. Turned out he was only a block away and ended up having him and his mate sitting with me, catching up in between me scoffing down my fried kuey tiaw. I followed the boys to check out the Welsh bar at the end of Courtenay Place but they decided not to go in as it looked pretty dead so we walked towards Molly Malones instead. The queue to get into Molly's was outrageously long, like 2 shops distance, and not even moving much! Damien and his mate decided to head home so we said our goodbyes there. Catch up with you another time, D!

Thankfully George and his mates walked over shortly after Damien and his friend left because it took another 15 minutes before I even got to the main door! They kept me company and we waited in line together to get into Molly's. One of George's friend was donned in this Superman-like costume but had everything in green. He wore a green eye mask and got his lips all green too! And yes, he's Irish. I had to take a photo with him because it was just so funny!

Finally caught up with Colm and bunch around 9pm upstairs of Molly's. Just in time to say hi and bye to Rachel and Debs who were on their way out. Hmm, we'll have to catch up this weekend at Colm's house party then...Colm and I both had our badges on - he'll get better luck than me since he's the real Irish! And he made me read out loud the sentences he emailed me earlier!! :) Chatted and laughed over drinks with Flo and Mel as well, then headed downstairs to check out the live band outside in the enclosed makeshift marquee set up for the night. Ah yes, Irish music, of course!

Bumped into the Soares sisters downstairs whom I've not caught up since Christmas. Lots more flitting around chit-chatting, dancing, sipping drinks in between laughs and photos. It was an awesome night out with friends :)

Left the gang around 11pm for the office to grab my laptop as I'm working from home tomorrow (gotta love the job - lets me work from home one day a week). The town was crowded as if it was a Friday or Saturday night. Would have liked to stay out longer but I really can't keep up. Need to catch up with my sleep....Photos taken tonight: http://www.flickr.com/photos/8070917@N05/sets/72157615514993096/detail/

Hmm, my final scorecard for kisses on the cheek was 6, all from my buddies (thanks you guys!), and not one person pashed me in the lips. Felt somewhat disappointed...boo...was also looking forward to my first kiss with a girl tonight...bummer, need to try other tactics next time...hmm... :P