Today is Waitangi Day, a public holiday in NZ which celebrates the signing of the Treaty of Waitangi. That means no work and more play - yay!

Caught up with Rachel and gang for brunch at Sweet Mother's Kitchen around 11.30am. The gang was heading out to Hataitai after brunch to check out the One Love 2009 concert held at the Velodrome. I've not done the concert before nor have I been to the velodrome - cool! I'm in :)

I need to show you these photos I took of Dvita - she's SO greedy! Ordered an extra side serving of beans only to not touch any at all! Photos taken of her and her mega-sized meal: 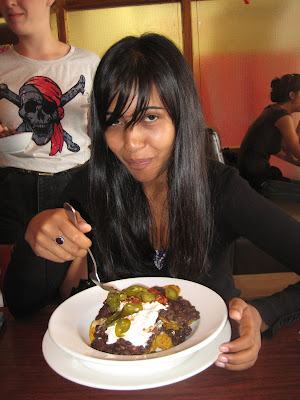 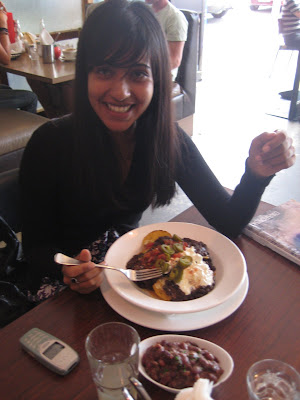 Speaking of beans, everytime I see them, my brain automatically associates it with farting. I teased Dvita saying none of us would be hanging out near her at the concert because she would be on a farting frenzy. I cracked up laughing when she starting to sing a children's bean song (I've never heard it in my life!). It is a rather long song but she only gave us a few verses which went something like this:

Brief stop at Waitangi Park to check out the Waitangi Day celebrations. This weekend is also the 7s weekend and we already saw many people in all sorts of costumes roaming the streets! It was such an awesome sight :) Photos taken on our walk: 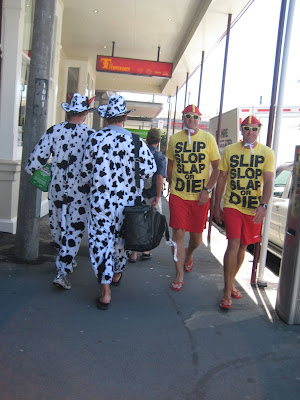 Boys in cow suits and lifeguards 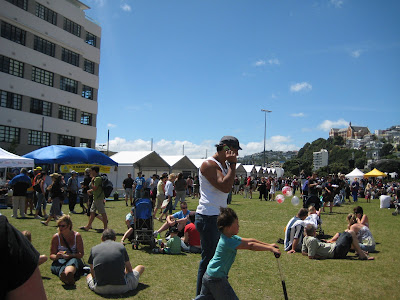 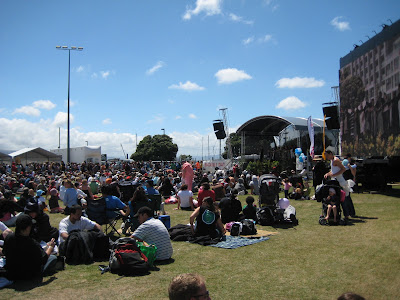 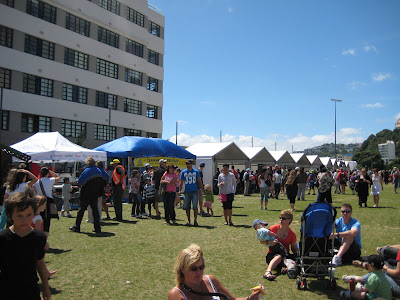 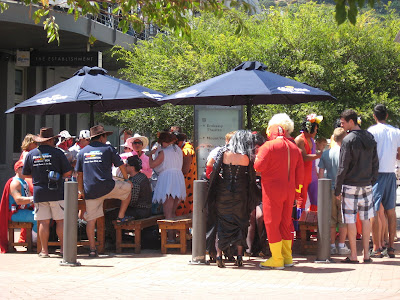 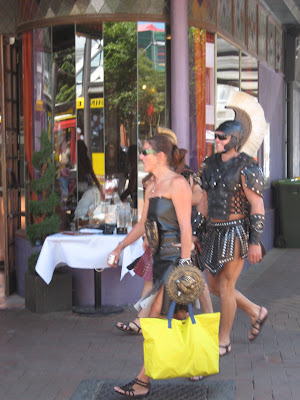 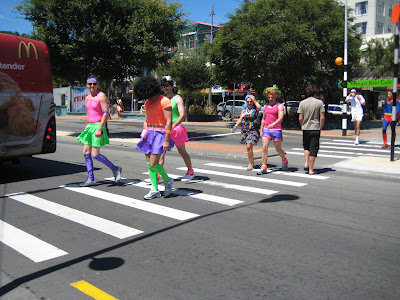 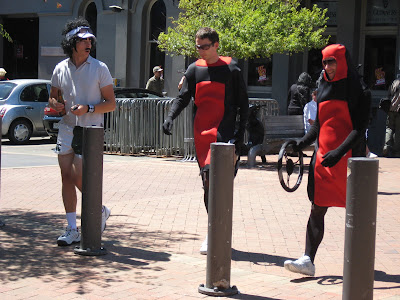 People in costumes of all sorts roaming around town
Dvita, Chris and I took the bus to Hataitai while some of the others walked or drove to the velodrome. OH MY GOD - the bus was PACKED!! Hopped off the bus in Hataitai Village and walked up to the velodrome around 1.30pm. Cost us $10 per person for the event and we were given a small Radio Active card as proof of entry. Those over 18, who planned to drink, got an pink wristband ;)

Found Colm in the queue at the entrance and us 4 walked towards the event site and found ourselves a nice spot in the grass. Colm went to look for the rest of the gang, Chris was chatting with his friend nearby while Dvita and I walked around checking out the shops. There were little stalls set out along the site, selling anything from clothes to nice smelling things to food. Bumped into Kelly and David at the other end of the field, who were busy painting henna on themselves :)

Such a nice summer's day - I need a beer! Dvita and I went to queue for our first round of drinks. She bought the first tray of 4 beers for $25 and each of us (me, Chris and Colm) took a turn to buy beers for us throughout the day.

Radio Active 89FM's One Love 2009 is a celebration of unity, respect and good feelings served up with the finest summer sounds of live dub, roots and reggae with top-notch lined ups including The Black Seeds, Unity Pacific, Little Bushman and Electric Wire Hustle. Spent most of the day just chilling out in the sun, catching up with friends (yes, we finally found the others including Kim who is back from her holidays, and we all sat altogether - quite a crowd, we are!) as we enjoyed our drinks to the laid-back music. I'm not huge on reggae music but do like The Black Seeds who were the last band to play this afternoon.

I'm SO relaxed right now...must be the four beers I've had...

Dribs and drabs more friends came to join our group. Damien came by with Michelle (also Malaysian), and Claus eventually popped over around 4pm. It was such fun finally having The Black Seeds on stage - most of us got up and danced to the music with the rest of the crowd, in flip-flops or bare feet!! Caught a ride into town with Damien and Michelle around 6pm. Claus was no where to be found - he kept disappearing while he was at the concert so left him to his own devices. He's a big boy - he'll be fine! Bye everyone - see you guys later this weekend! Photos taken at the concert: http://www.flickr.com/photos/8070917@N05/sets/72157613483795322/detail/