Normally, my work drinks with the boys would be on Fridays but as tomorrow was a public holiday, the 1st BIGAS get-together was held today (Thursday). Everyone who wanted to attend, both current and former colleagues chipped in $10 each for beer and pizza. It was a good turn out, with me being the only girl but the boys usually just treat me as another one of the blokes anyway :) Couldn't stick around for long as I was meeting up with Rachel and gang for a movie. Photos taken at the office: http://www.flickr.com/photos/8070917@N05/sets/72157613400927900/detail/

Rachel had organised a movie night for the gang at Embassy Theatre to see Slumdog Millionaire. Cost us $18 per person for platinum leather armchair seats and our large group took half the whole row. The movie started 6.15pm and I highly recommend you see it. It potrayed the lives of Indians living in the slums, how the children survive growing up, which is very similar to those depicted in Brazilian movies of Rio favelas. Amazing story, with some provoking scenes. I absolutely enjoyed the movie :) Thanks for organising this, Rach!

After the movie, everyone strolled over to Hawthorn Lounge for drinks. Colm and I made a stop at Cha for dinner and joined the rest around 9.30pm for a drink. James and Geoff were there too. Everyone flitted around the jazz lounge, sipping their drinks and catching up. Was really nice.

Oh, did I mention that James has snipped off his locks and not wearing his hats these days? Took me awhile to get used to it! Photos taken at Hawthorn: 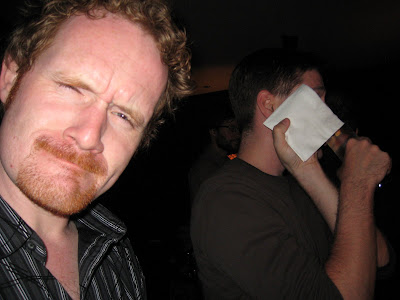 James giving a look of disapproval - why is Geoff so photo shy?? 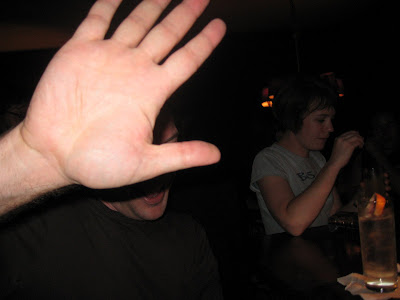 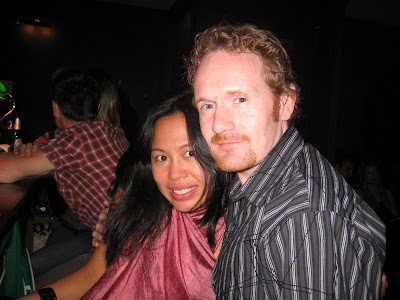 Me and buddy James 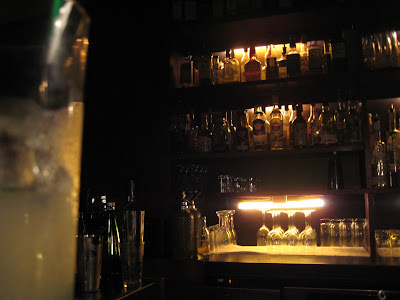 View from the bar 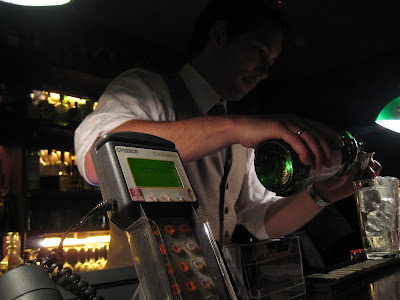 One of the Hawthorn boys mixing a drink

Headed home at 11pm and James was a gentleman, escorting me home, even though I only live 3 blocks away. He was really sweet, offering me his arm when crossing the street. So typical of James - he's just this old-fashioned, swing dancer type of guy. Sometimes I feel that I zorb to the old ages with his little etiquettes. Both James and I agree that this sort of etiquette are uncommon in today's world and that it should be kept up. Male-female relationships, even as friends, now lacks physical contact for contact of any kind tends to trigger warning bells that it may mean something more than platonic friendship. For me, cheek-kissing when greeting hello and goodbye, hugging, a gentle squeeze on the arm or rub, even stroking of the hair, has become normal for me and I don't really think of it as any different to just purely platonic, the love you have for one another like siblings or friends. Though some cultures may find such behaviours inappropriate. Hmm, there's no wrong or right I guess. I say, James, keep it up - it's a good trait to have and I'm sure the women love it ;)