Secret Santa is a holiday tradition in most of the places I've worked in NZ which everyone in the team or department are randomly assigned other colleagues to whom they anonymously give a gift. And the BI team aren't an exception! We had our gifts put underneath our office Xmas tree collected into a Santa bag, and over morning tea, the presents were given to each team member by Chris. Oh you should see some of the gifts - bummer, should have taken my camera to work! What a laugh we had!! Luke, now very well-known to be the boozer in the team, was given a huge bottle of beer; Scully was given a pair of cushioned handcuffs (just look at the glee in his eyes!); Chris had a toy gun which shoots rubber bands, and the rest of us had assorted gifts ranging from shot glasses (I got those) to bracelets to bicycle attachments.

Oh my, my, Scully, what are you doing??? He managed to cuff himself with his arms behind the back of the chair while we were having our usual Friday team leads meeting and he knew the others would take the opportunity to 'torture' him - Nicky, Jonesy and Camila got whiteboard markers and started to draw on Scully's face! Red lipstick, black whiskers, a kiss on one cheek and a heart shape on the forehead...and he's still struggling to disentangle himself! Oh, we just cracked up laughing!!

We also had to farewell a staff member today, Ronaldo II, Andrew's goldfish, found dead this morning (last year around this time, Ronaldo I committed suicide by jumping out of the fish bowl and now this!). Sam came to my desk with a glass with Ronaldo II in it and we decided to give him a proper funeral then inform the whole team: 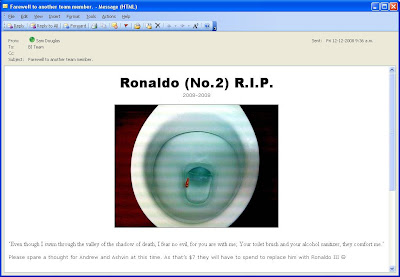 Sam's email obituary read: Ronaldo (No. 2) RIP. 2008-2008. "Even though I swim through the valley of the shadow of death, I fear no evil, for you are with me; Your toilet brush and your alcohol sanitizer, they comfort me". Please spare a thought for Andrew and Ashvin at this time. As that's $7 they have to spend to replace him with Ronaldo III :(

Let's all bow our heads down for a moment of silence...you can hear only individuals burst into laughter at their own desks...Our Fridays at work are usually like this with this crazy bunch :) Hehe...

I need to nap before heading out tonight to Kalwant's farewell party. Woe is me my bestie is leaving for Perth! Sobs - you must keep in touch and visit! Going to catch up with a few friends prior then head over with Ron. Ron needed my protection as he had very naughtily put up photos of Dvita on Facebook which she had told us all not to (oh, but we must for a good laugh!) and I dared Ron to put it up this morning (and he did!). The brave boy is afraid he'll get slaughtered as he walks to his doom tonight so is using me as shield. I'm DEFINITELY bringing my camera - can't miss the bloodshed! Hahaha!