Adrian had invited me to join him and mates to a gig at Bodega Bar on Ghuznee St this evening. You would not believe this but I've never been in Bodega Bar before (and I used to live 2-3 blocks away from this place) - another first for me! Bodega virgin no more :P I wasn't too sure if I would make it as I still had dance practice tonight but Ron was keen to check it out so we wrapped up class and with Alicia headed to the bar to see what Harbour City Electric was all about. Tonight was also the last week of dance practice before we all go on our year-end holidays so took group photos at Ron's: 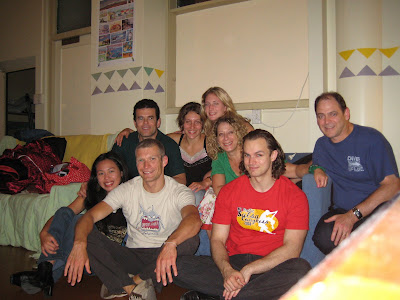 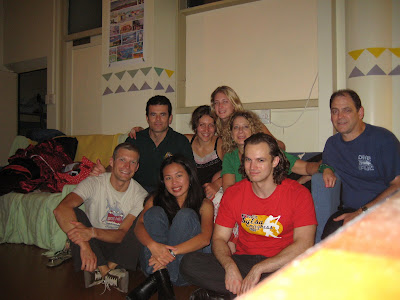 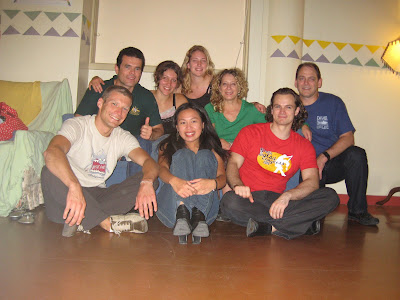 Cost us $5 per person to enter Bodega Bar and The Free Tones were playing when we arrived (support band playing funk and soul) and shortly after, Harbour City Electric (HCE) was up. HCE is a 7-piece soul band from Wellington and the music they played was pretty cool and very Wellington/NZ (NZ's known for the funk, soul, electric jazz and reggae music genre). Haha, Ron was telling me that he could see the excitement in my eyes being in Bodega for the first time. Hehe...well, it kind of reminded me of my time in Chicago where I would head out late at night to check out unknown bands around the city and how much I loved doing so thus the brightly lit eyes :) We danced our hearts out to the soul and funk music played by the bands and DJ, even thrown in a threesome cha-cha. The place wasn't very packed so we could groove and go crazy however we pleased. Of course, we had to do the human sandwich and at one point, I was getting ping-ponged in the butt by both Ron and Adrian! Hey, no fair!!

Alicia left around 11ish while I stayed on with the boys till the gig ended around midnight. I've NEVER stayed out this late on a weeknight!! Eeks! And I believe I would feel pain in the neck tomorrow from bobbing my head too much tonight...but I had an AWESOME night - thanks for the invite, Adrian! We need to do this again :) Dropped off the boys (yes, I'm notoriously known to see boys to their front door) and hit the sack by 12.30am. Photos taken at Bodega Bar: http://www.flickr.com/photos/8070917@N05/sets/72157611084528801/detail/