I've been having this pain in my back and spine since Sunday evening. Not too sure what's the matter but I'm now sensitive to touch i.e. just lightly touching me feels like you've touched my sun burnt skin, only I'm not sunburnt. Have been popping panadols for the last few days and decided since the pain wasn't going away, I should seek medical advice. Problem now was that my doctor doesn't have an open slot till Friday, which perhaps by then, my pain would have gone. I said to the receptionist over the phone yesterday that this was pretty ridiculous and her response to me was that if I wasn't happy with the arrangement, I could bring it up with the doctor. Yeah, like that's going to change anything - I'm the one in the pain here, lady! Not a happy chappy at the moment with this pain. Haven't been swimming or to the gym or even dancing as much as I normally do. Trying to cut back on activity in hope I'll get well soon (plus any slight movement just hurts anyway). Sigh, pain, pain, go away!

Yippee! Someone has cancelled their appointment so I'm seeing the doctor at 4pm! Give me a jab in the spine to extract away my agony!!

Just for the record, I'm not suffering in pain as a result of my 5km walk for the fundraiser - I'm normally an active person and a 5km walk would do me no harm.

Though I may be grumpy, I still have a sense of humour. Sam's got a fish tank called Guantanamo Bay in the office with 2 goldfish, Yahoo and Google, in it. When Joanne was still with us, she would remind Sam to clean the fish tank or do it herself when she sees it turn a shade of green. But Sam is SO LAZY! I have no idea how long it has remained this disgusting green - I don't think the fish can even see where they are swimming!! Stuck a Post-It note on the fish tank with text "Help me! Help me! I'm DROWNING in my own shit!" when he wasn't looking and returned after lunch just to take a photo of it: 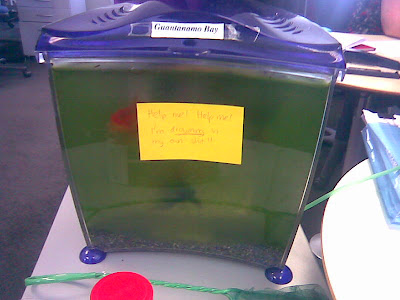 Some 60 bucks poorer, I was told by the doctor that she doesn't know what's wrong with me, prescribed me with a stronger doze of voltaren and told me to just wait and see what happens. This is usually what she tells me when I see her - sometimes, I think I can be my own doctor. Sheesh...so nothing I can do but take more painkillers and hope for the best.

Speaking of spending money, this month is a month of car bills. Just spent $400 yesterday on my car's Warrant of Fitness and annual service, and just a week ago, about $210 for the annual car registration. In a week, another $600 for my annual car insurance. THAT'S HELL OF A LOT OF MONEY!!!!!!!

Oh yeah, I've been watching DVDs of an old British TV series called Mind Your Language. Absolutely love it! It was a TV comedy series of an English language teacher and his motley crew of foreign students aired in the late 70s - I remember watching reruns of the show with Mum and Dad when I was a kid and we would laugh so much at the humour, which was mainly the students misunderstanding English words or terms, and plays up to the cultural stereotype of their individual nation of origin. And I'm not surprised some of you have been in actual situations like those potrayed in the series, especially when communicating with people whose first language is not English - I have! Worth checking it out just for a good laugh :)