Gafieira class was called off tonight as the boys all had other plans. Good for me because that meant I could catch the final week of The Little Dog Laughed play at Downstage Theatre! I've been thinking of going to the play after I read the review in the local papers but just never got around doing so. It somehow came up in my conversation with Damien over dinner at his place last night and we decided on the spot to watch the play today - yay!

Oh, did I mention Damien's a fabulous cook? He made Ayam Masak Lemak Chili Padi for dinner last night, a typical Malaysian chicken dish from the state of Negeri Sembilan and boy was it good! And he made it with spices from scratch!! I'm most impressed (and I'm the Malaysian who didn't even know such a dish exist...). His patients must be wondering why his fingers were all stained yellow (from crushing tumeric) when he went to work last night...hehe... :) Thanks for the dinner - we should do it again so I can sample what other Malaysian dishes you can cook!

Oh, oh, my dress from Trade Me has arrived! I was already thinking of going to the party as a harajuku girl should my dress not turn up in time for the party but glad it arrived this morning. Had put it together to see what it would look like before Damien popped over. What do you think? Check it out: 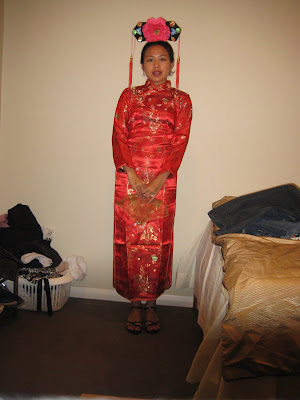 Couldn't find a suitable handkerchief to match but found a little gold tissue/mesh bag from the $2 shop which I cut part of it out and it fit my outfit perfectly :)

Hmm...it's 7pm and Damien is still not here. Why do I have a feeling he's either forgotten or overslept....hope he gets here soon so we would be there on time...

Phew, that was a bit close! We got in just on time! Damien overslept and rushed over to get me, dropped me off at the theatre so I could pick up the tickets while he went to hunt for a carpark. Alright, breathe, we are all good now - time to enjoy the play!

The Little Dog Laughed is a play about 4 characters: an actor, Mitchell, his acerbic agent Diane, a hustler named Alex, and Alex's girlfriend Ellen. When Mitchell and Alex become involved in a physical relationship, Diane is concerned that what she describes as Mitchell's "slight recurring case of homosexuality" will derail his career before it gets started. The play is a highly articulate, deeply funny look between-the-sheets at image making, sexual politics, celebrity hype and the age-old questions of who really deals the cards when it comes to love. Cost us $43 per person for a stall seat.

I knew about the homosexuality part of the story but what I didn't expect was full frontal nudity and passionate kissing on stage by the 2 men! Opsie, Damien must be thinking what on earth did I drag him along to...but hey, the boys were very good at it :) The play starred 4 of Wellington's hottest young actors - Kip Chapman (vaguely familiar - where have I seen him before??) who played a flamboyant character of Alex, which was my favourite. Richard Knowles (aka Mitchell) had a washboard chest that I'm sure all the ladies in the audience were happily admiring when he took off his shirt time and again throughout the play...hehe...The female characters played by Sophie Hambleton (Ellen) and Renee Sheridan (Diane) were also amazing. Interestingly, all characters put on an American accent, again, something I didn't expect at all. A very entertaining 120-minute show with a 15-minute interval, full of wit and cynicism. Recommend you see it if you still have a chance. I absolutely enjoyed it and I hope you did too, Damien!

It's rare to find me with the same group of friends 2 days in a row - Damien, you're just lucky to find open slots in my diary 2 consecutive days this week ;) Haha, okok, so maybe I am a socialite with so much going on that friends need to pencil in a slot in advance or they won't find me. I've had 6 invites to parties and bbqs this weekend and had to choose as I can't split myself at so many locations at the same time, even if I wished I could!