Was up at 9am and it was pouring and cold outside!!! This is DEFINITELY not the weather I expected this weekend :( Slept rather well on the futon couch last night, I have to admit. Hmm, wondered if I was just too tired or the couch was really comfortable...Jumped into the shower and got ready to head out. Went downstairs and continued reading The Secret book as I waited for the others to get ready. I HAVE to finish this book before I go home! Couple more photos of Sharon's place: 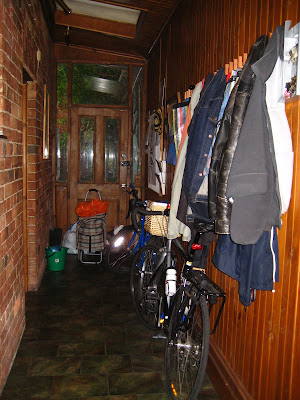 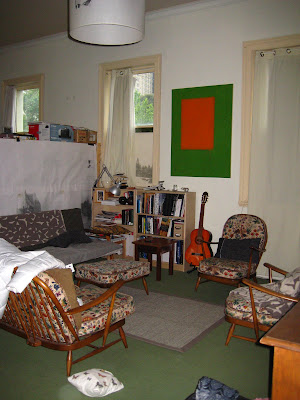 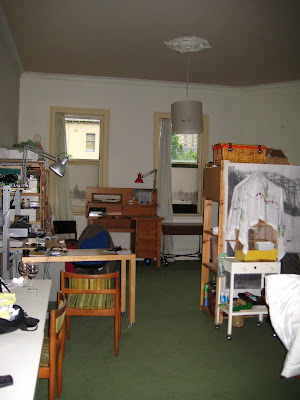 Around 10.30am, me, Kalwant and Euleste braved the rain to Brunswick St to Mario's Cafe for breakfast. Argh! It must be about 12 degrees Celsius this morning, wet and cold. It was drizzling when we went out and then poured heavily - we had to run a few blocks and find shelter at the tram stop on the way to the cafe.

One thing I love about Melbourne (similarly to Wellington) is its cafe culture. There would be a cafe here or there where you can hang out with friends, family or on your own and enjoy a nice cuppa and just relaxing. It would be nice to live in a city of arts and culture of this size - I'm sure there's always some band or performance or something on every other day in this city.

Had fried eggs and sausages (evil, evil) with my flat white coffee for AUD14. The cafe takes cash only and even has an ATM machine inside the shop for you to withdraw cash! Strange, so very strange...

At 12pm, us 3 took a tram to Direct Factory Outlet (DFO) on Spencer St located next to Southern Cross Station where our 2 shopaholics spent the next few hours shopping. DFO is a place where you can find over 120 brands under one roof but pay up to 70% off its retail price. Cheap as it may be, I can't be splurging on this trip as I've been spending too much money country hopping the last couple of months! And I have another big one coming up in a few weeks!!

Hmm, the tram takes only coins for tickets...Cost AUD3.50 for a 1 zone full fare which is valid for 2 hours. I have no idea what that meant but followed whatever Kalwant did and bought my ticket. Euleste didn't have any coins so didn't buy a ticket! Eeks, what if someone comes by to check?? Fortunately no one did. Gee, I wonder how many people hop on the tram only to find they have no coins and then what? Hop off? Get a free ride?? Rather ridiculous that the machine doesn't even change notes into coins...

Shop, shop, shop, I followed the girls from shop to shop at the factory outlet. Stopped for a coffee break about 2.30pm and continued on shopping. Sharon and Mark came to look for us around 5pm and we walked in the cold wind over to Federation Square to catch a tram home. Photos taken today: http://www.flickr.com/photos/8070917@N05/sets/72157610584427837/detail/

Sharon and Mark headed home while me and the girls walked down Lygon St to grab dinner and ended up in Taste of Asia. Had their Wa Tan Hor for AUD8.90. What?? No pickled/vinegared green chillies??? Argh, it pisses me off everytime I order this dish and not have it served with the chillies. It's ALL about the chillies - makes the dish taste so much better!! Grumble, grumble...

Headed back to Sharon's around 6.45pm, got showered, dressed and back downstairs for a drink and continued reading my book. At 8.30pm, us girls left Mark at home and took a taxi to Corner Hotel on Swan St in Richmond (suburb 2kms south-east of Melbourne CBD) where Euleste was meeting her friend and all of us had tickets to see a gig playing at the venue. Cost us AUD22 for the taxi and entry into Corner Hotel. It was still very early so we hung around at the bar for a drink. I tried Cascade Premium Light for AUD4.20 - not bad but has an after taste though.

Euleste's friend decided to give the gig a miss so 4 of us were here on our own. At 9.15pm, opening band Clue to Kalo was on. I'm sorry but all I could hear was nothing but noise - the music just wasn't my cup of tea. Was glad when the girls decided to check out other bars in the area for a bit. Somebody save me, please!

Around 9.45pm, we braved the rain and ran across the street to Post Office Hotel. Nice little upper class bar that was bustling with patrons. Tried the local beer, Little Creatures for AUD4.50 - tasted much like the Kiwi Tuatara Hefe. I like! Buying beer in Oz sure is cheaper than in NZ if one was to work and live here!

Kalwant said that Aussie boys are generally taller. Really?? Hmm, perhaps I've lived in NZ for too long and what we see is the normal/average height. Yeah, I guess it is quite true because most of the guys in here seemed to be towering me. And they are DEFINITELY more cute guys of my age range too...hmm, maybe I do need to move across the Tasman to find me a man...

Around 11.15pm, we headed back to Corner Hotel which was quite packed by then. The main band, Pivot, started their gig at 11.30pm. Honestly, I didn't know what type of gig this was but said ok when Euleste bought the tickets a week ago. Turned out to be a mix of trance/psychedelic alternative music. Lots of student-looking type people in the crowd, including this one guy with long, uncombed hair swinging his head round and round like a propeller. I just didn't feel I was in the right place and neither in the frame of mind to enjoy the music - usually I'm quite open to new experiences but this just wasn't me and all I could think of was to go home.

The girls decided to call it a night and we made our way home about 12.15am - yay! You wouldn't believe it but it was such a mission to hail a cab from the street! Every one in the block was trying to stop a cab and literally 'fighting' for one!! When we managed to stop one, a random man tried to talk the Sharon into sharing the taxi together. Sorry but we are a full car. Get your own, mister!

So glad to be home in pajamas and chatted with the gang over drinks and cookies that Sharon and Mark made. Yum! Seriously guys, you should consider opening a little cookie shop in the interim till you find your dream job :P Couldn't keep my eyes open and gave up by 2am to hit the sack. Photos taken tonight: http://www.flickr.com/photos/8070917@N05/sets/72157610584676459/detail/