Beep, beep...beep, beep...it was 3.40am - time to get up and ready to head to the airport. I'm SO sleepy and kept hitting the snooze button. I want to sleep some more but couldn't! This morning, Kalwant and I will be flying to Melbourne to spent the weekend with Sharon and Mark. It was a girls' weekend away trip that Kalwant suggested we do after our trip back from Rarotonga. Sounds like a plan! Plus the flights only cost me $300 return (I had airpoints to claim) so it was a definite go :)

Left for Wellington airport around 4.30am. Us girls shared a cab for $10 each, rushed through the check-in queue (crap, will we get to the plane on time - just look at the queue!), paid our $25 per person departure tax and a quick stop to collect the pre-ordered alcohol to bring over to Melbourne. Rush, rush!

5.30am started to board the plane and off we went to Melbourne. Spent the next 3 hours or so snoozing uncomfortably, head lolling in all directions and I would get up to find Kalwant sleeping so soundly on that neck rest/pillow of hers. Grr...It was a crappy old plane with rather tight seating room and no on-demand TV to watch. Boring! Well, I had to find my own entertainment - taking photos...hehe...here are some taken on board the plane: 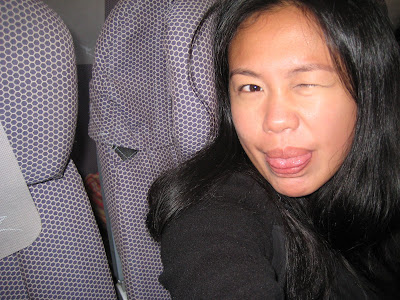 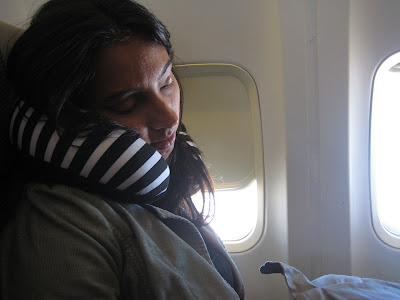 I need to buy one of those pillows - just look how sound asleep Kalwant is! 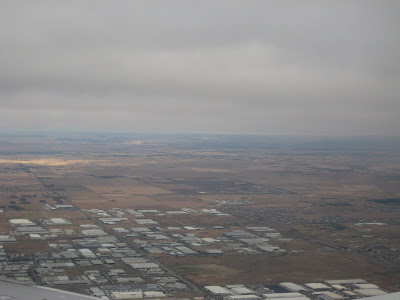 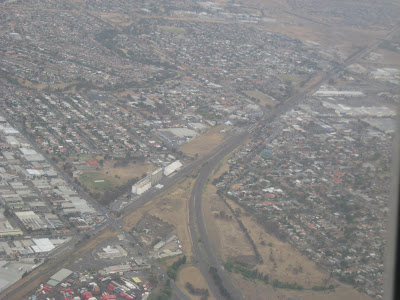 Photos of a rather dry and gloomy looking Melbourne...


Arrived in Melbourne around 10am (local time is 8am and from now on, the times would be in Melbourne time). Wow, the last time I visited Melbourne was in 2003 - it must have changed quite a lot since I was last here. Really didn't know what to expect but not knowing sounds very exciting!

Ooo, I like the new scanning system they use at the customs check point for NZ and Australian passport holders. A self-checking systems where you slide in your passport into a machine that reads your details, then remove it and walk towards another scanner that takes a photo of you and you're done. Quick and easy!

Kalwant has been raving about this doughnut chain called Krispy Kreme the whole journey - I have no idea what is so great about them really. According to Kalwant, the doughnuts just 'melt' in your mouth. Really? Well, we need to get some over to Sharon's then. Hunted for the shop in airport and bought a box of 6 doughnuts for AUD13.95.

We eventually decided it was more convenient to taxi to Sharon's and tried hailing a cab at the airport. The taxi service here is so weird! The cabs wouldn't take us because Kalwant has a large luggage bag which wouldn't fit in the boot (somehow the taxi's here have spare tyres that take up most of the space in the boot) so we had to wait for a station wagon taxi. Sheesh!

Around 9.30am, we arrived in Carlton (a suburb 2kms away from Melbourne CBD) where Sharon and Mark were living. Got dropped off on Rathdowne St after driven up and down the street looking for Sharon's place - we couldn't find the house! I wasn't impressed that for AUD55, the taxi driver couldn't drop us off at our destination. Tried calling Sharon but she was probably still asleep so we hopped off the taxi and tried looking for the house ourselves, dragging our bags up and down the block. Finally got through to Sharon who told us that the pale yellow corner house we got dropped off at earlier was where she was living. Kalwant and I looked at each other, brows raised - she serious? She's living in THERE??? But she said she was living in a nice house...The building had no number, mirrored windows all round and just looked like some dodgy hostel/motel from the outside...Oh, but the inside was totally not what we expected it to be! A nice and cosy 2 storey house that was way huge for just Sharon and Mark ;)

So lovely to see you both again! So much to catch up on!! But first, I need some medicine to curb this headache of mine (lack of sleep and water)...Turned out Sharon and Mark were house sitting in this residence for a few months (which includes taking care of Polly, the little budgie) - cool! Both were pretty settled in Melbourne by now and busy looking for work. We had our girly catch up over hot drinks and Krispy Kremes (damn, they do melt in your mouth - yum!) while waiting for Kalwant's friend, Euleste, to arrive from Sydney. Mark, you had better hurry to the kitchen or there would be no Krispy Kremes left for you! Photos taken at their home:


I left the gang around 12.30pm to join my cousin sisters, Jean and Juvene, for lunch. I've not seen the girls for quite awhile now (probably a few years?). Wow, they have both grown up so much! Gee, that statement suddenly made me feel quite old...The girls came to pick me up in Jean's BMW SUV (I've always wanted to own a big car like that!) and headed over to Middle Park (tiny suburb located between St Kilda and Albert Park) for lunch at Tram Cafe. An interesting cafe that is built in what was once a tram stop. We caught up over lunch and it amazes me how much we've all grown up (and apart) over the years, living our different lives. Wow...

Jean shouted us lunch - oh, you shouldn't have! Thanks so much :) The cafe doesn't have EFTPOS facility which was rather bizarre for me since I come from a country that zaps cards everywhere. Left the cafe around 2pm and when around town with the girls while they ran some errands before taking a rest at Jean's apartment on Swanston St, smack right in the middle of Melbourne CBD. Spent the next hour or so trying out some of Jean's old jeans that she wanted to pass on to me (score!), played with their chihuahua, Allegra, and had coffee made on this interesting Nespresso machine that takes in little capsule shots of coffee and makes the perfect cup of espresso - awesome! Jean was such a doll - she even drew me a map of the CBD area in case I plan to ponder around the area on my own during my weekend in Melbourne. Thanks cuz, you're so sweet :) Photos taken this afternoon with Jean and Juvene: http://www.flickr.com/photos/8070917@N05/sets/72157610583845579/detail/

Got dropped off back at Sharon's around 4pm. Was lovely to catch up with you girls! I'll need to make another trip back just to catch up with my extended family members who are living in Melbourne - this weekend is way too short to catch up with everyone. In fact, I've tried moving to Melbourne each and every time I packed up and left NZ but somehow still ended up back in Wellington. 3 attempts and still not there! Strange how life is, huh?

Oh yeah, here's a photo of Sharon's place taken from outside: 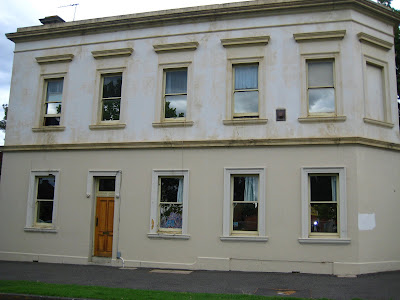 Sharon and Mark were busy on their laptops, Kalwant and Euleste taking a nap upstairs. Me? Took a rest, showered and ended up reading a third of the book titled The Secret by Rhonda Byrne I found in the bookshelf - an interesting and fascinating book with theories/ideas about how what we put in our minds shapes aspects of our lives. No harm trying it out to see if it works...

Around 8pm, everyone was dressed and hanging around at home, chatting over drinks before we headed out for dinner at Tiamo II on Lygon St. It was another place Kalwant was talking about on the plane, this one famous for their Italian food. A friend of mine from Wellington, Jason, had recently moved to Melbourne and he too came to join our crowd for dinner. So happy to see you again, bro!

We didn't pre-book a table so lucky for us the maitre'd could fit us in their busy restaurant. I had their Spaghetti Don Giovanni which was a tomoto based mussel spaghetti. Very yummy but felt too full after finishing the meal. But when the waitress came to ask if we had room for dessert, almost everyone said yes! I tried their pannacota (literally means cooked cream in Italian) - a simple and light Italian dessert that is oh absolutely divine. SO good! Cost me AUD30 all up for my meal which I thought was quite reasonable. Photos taken tonight: http://www.flickr.com/photos/8070917@N05/sets/72157610584025517/detail/

Hmm, the restaurant didn't allow us to split the bill - what a hassle having each of us to give cash to Euleste to settle the bill!

Left the restaurant around 10.45pm and several of Kalwant's friends came to join us. All of us walked to Brunswick St to check out the nightlife in town. First stop, The Provincial Hotel, a nice bar/club located at the corner of Brunswick and Johnston Sts. I guess I was just tired from a long day so didn't dance but just sat around sipping my beer and chatting with friends.

Around 12am, we headed over to Kanela Bar & Restaurant, Melbourne's only flamenco restaurant-tapas bar. There were no bands or performers on tonight and though they were playing salsa music, there was no dance area to dance salsa either. Oh well, just enjoy the music and grab another drink. Kalwant passed me AUD5 that she owed me earlier and a random guy came up to me, asking me why he didn't get the money instead. The whole conversation went off tangent where he told me he couldn't dance but will entertain me for the 5 bucks. What the??

12.30am we left home. The weather was getting colder - eeks, and I thought coming to Melbourne, the weather should be warmer than in Wellington! It was lovely to see Jason and hear that he's well and enjoying his new life in Melbourne. Keep in touch!