I'm having guests coming to stay with me for the first time! Friends Louise and Quentin aka Wratty whom I met during my trip in Tasmania were coming to visit this weekend and staying at my humble abode while they were here. Spent the week spring cleaning my place during my spare time before they turned up. Not much to clean but just wanted to have a place look presentable :)


Friday, 10th October 2008: Rushed home from work drinks at 5pm to wait for Wratty to turn up before we headed over to YHA to pick up Louise (me running around in between places again as usual...). It was so nice to see them again for I had never expected we would cross paths after our Tassie trip! And we were still as crazy as back on the trip - us brilliants ;P It was as if we were never apart even though it has been 6 months since we last saw each other!! Great job Louise for pulling this mini gathering together in such a short time and with all 3 of us living in different locations (me in Welly, her in Australia and Wratty in Blenheim). It was a pity Niek and Ilse weren't here with us but definitely not forgotten - we'll have to send them photos of what they missed out :P

A quick grocery shop for me and on the way back to my place, we drove up to Brooklyn Hill to take photos of the Brooklyn Wind Turbine and views of Wellington City. Funny that I see the wind turbine from my apartment everyday but I've never been up the hill to have a close look at the monster-of-a-turbine. This Vestas turbine has a blade length of 13.5 meters and the nacelle is 31.5 meters above the ground. Its maximum output of 225kW is enough to supply about 60-80 homes throughout the year. You could hear the "vromp-vromp" sound of the blades just standing around! Photos taken at the wind turbine: http://www.flickr.com/photos/8070917@N05/sets/72157607947054160/detail/

Back at my place, we chit-chatted over drinks till about 9pm, then headed out to grab dinner in town. Photo of Wratty having a chat with the new local busker, Mexican singing man, on our way to dinner: 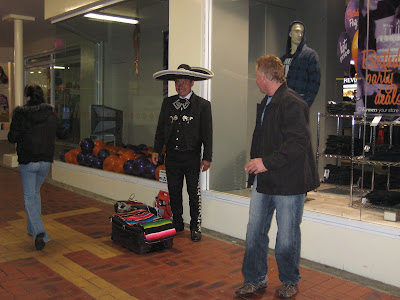 Ended up at Oaks Satay Noodle House on Cuba St and I think the staff there couldn't wait for us 3 to get out as we continued chatting until they were closed! But we have so much to catch up on!! Left the diner and took a walk down Courtenay Place for Louise and Wratty to check out the night life in Wellington. Louise wasn't into a big night out after her many nights out drinking while on the backpacking tour down to Wellington so we all decided we would take it easy, maybe a drink or two and head home. Besides, Wratty and Louise have a tour in the morning so couldn't stay out late anyway.

Niek & Ilse, guess who we found on the streets! See how much we miss you guys? This photo is for you - just imagine you are the Star Wars character and here in Welly with us: 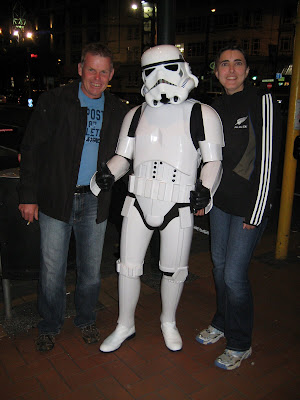 Since Louise was a Guinness drinker, we headed over to Molly Malones Irish Pub & Restaurant for a drink and you wouldn't believe this but we found some of my workmates whom I was drinking with earlier there - Mark, Mehrdad, Ashvin and Andrew. Guys, where's the rest of the gang? Turned out, they were the last ones remaining as the others couldn't keep up and had left for home! So we joined their table, trying to talk to each other (it was so funny to see Andrew communicating with us using his mobile phone - he was showing us his words in text form) in the crowded and noisy pub. I got to try some of Louise's Murphys, a variation to the Guinness which was less bitter and alright for a non-Guinness fan like me. But I think I'm sticking to my lager hehe...

Oh, I so wished I had that on camera - not everyday do we get to see Andrew boogie! He did a little jig with me and Louise, dancing around in circles, linking arms. He was the last man standing; the other 3 had left by then. Oh, I cannot believe I didn't record it!!! It would have been a cracker at work on Monday :P

We left the pub around midnight and headed for home while Andrew went back to the office (seriously, Andrew, after all the drinking??). Photos taken of The Brilliants and on Andrew's mobile at Molly's: 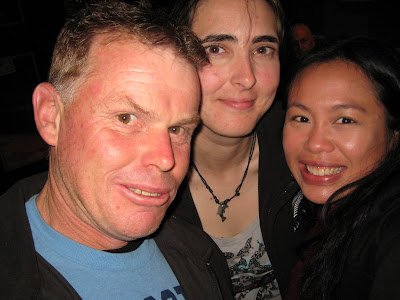 The Brilliants - Wratty, Louise and me! 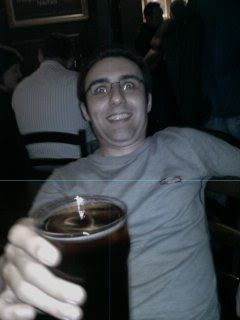 Mehrdad all excited with his Guinness 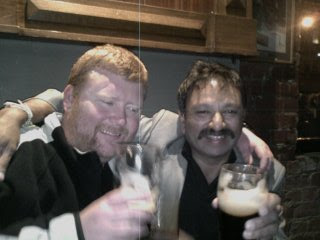 Buddies Mark and Ashvin having another drink


Saturday, 11th October 2008: Was up at 7.15 in the morning. Louise and Wratty were up and got ready to head out to Civic Square where they will be joining the local Lord of the Rings tour for half a day. I would have loved to join them but had visited most of the places before so decided to pass. Instead, I went for a swim and bought us tickets to the Vodafone Wellington Lions vs Taranaki quarterfinals rugby game for this evening. Louise and Wratty were into their sports and Louise was keen to watch the game. Sounds like a plan - my shout guys!

Louise and Wratty are very fortunate that the weather is so nice today - I'm sure they would enjoy their tour! Hopefully the sun keeps shining the whole weekend. Days like these are rare!

Met up with the two at Civic Square around 1pm and headed down Lambton Quay where Louise was picking up her Taranaki shirt (oh-o, Wratty supports the Lions - it would be interesting being sandwiched between them at the game...) and a bite. With the little time we have this afternoon before the game, I took them to the Wellington Cable Car, one of Wellington’s oldest and most popular tourist attractions, where we caught a return ride up to the lookout and back down. I must say, the renovations done at the bottom station made the tourist attraction much nicer looking now (used to be dark and grubby during my student days). Photos taken: http://www.flickr.com/photos/8070917@N05/sets/72157607954453187/detail/

Louise had her Taranaki shirt on (it was striped yellow and black like a bumblebee) and as we walked around town, we had random people shout "GO THE NAKI!!" at us (or rather, at her). Hilarious!

We cruised along the waterfront and caught up with Christian outside Te Papa. Thought of playing a trick on him, getting Wratty to walk up to him, call him by his name and introduce himself but too bad Christian turned around and saw us. Ooo, missed our chance! The four of us continued walking towards Oriental Parade and along the way bumped into several friends. You know, I never really thought I knew so many people in town until we stopped so many times to do introductions throughout the day. We met people from work, from salsa and others I got to know over the years. At one point, I was hoping we would NOT meet anyone I know so we could actually get to the stadium in time for the game! Photos taken on our walk: 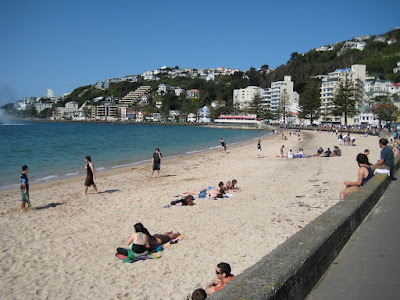 When the sun's out, so are Wellingtonians (and more skin!) 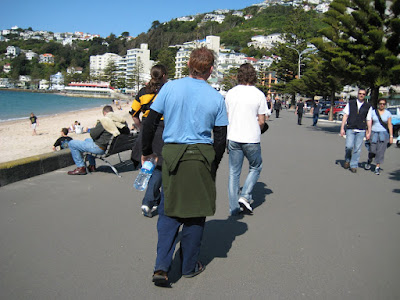 Louise, Wratty and Christian walking ahead of me


By 4pm, we headed back the opposite direction towards the Cake Tin aka Westpac Stadium to watch our game starting at 5pm. Yeah, I need an hour to walk there because I was in heels plus we kept stopping to chat with my friends...

Tickets cost $22 per person and we were seated where one of the goal posts were located (apparently pretty good seats according to Wratty). I've never been here to watch a game when the sun is still shining oh-so-brightly! It was an awesome game with lots of tries, a few fist fights and plenty of running around (the Nakis looked like bumblebees buzzing around in their striped rugby tops). However, the stadium was rather empty so I couldn't feel the energy from the cheering crowd. The Lions won Taranaki 50-30. Photos taken at the rugby game: http://www.flickr.com/photos/8070917@N05/sets/72157607953211483/detail/

Hope you guys enjoyed the game as much as I did!

Louise and Wratty were just saying that we haven't bumped into anyone I know in the last hour as we walked back home and George appeared across the street! Haha, what a coincidence! Yeah, yeah, I'm SO popular :)

Back home to change and out again for dinner by 8pm, tonight was Louise's shout at Hog's Breath Cafe on Courtenay Place. Yummy steak...I always end up polishing my plate and then feel stuffed! But there's always room for dessert!! Wratty was craving for a nice lemon meringue so suggested they try Espressoholic just a few shops away. Apparently they do serve a good lemon meringue - got the approvals of both Louise and Wratty :) Thanks Louise and Wratty for dinner and dessert! George came to join us for awhile before heading of to his favourite hang out place, Kazu Bar. It has been a long day for my fellow guests and Louise was leaving on a really early flight tomorrow (5.30am, I think) so we were back home by 11pm for her to organise her stuff.


Sunday, 12th October 2008: Was up at 4am to drop Louise off at airport. Wratty tagged along just to make sure Louise leaves! Oh, you are so evil! :) It was sad to say goodbye yet again but I believe we'll see each other again soon - we've managed to get together this time, we can definitely do it again! Louise may even be moving to NZ - yay, another headcount to our population, hahaha...Have a safe flight home, Louise, and keep in touch!

Back home and snoozed till 8am, then up having breakfast and chit-chat with Wratty. I had an appointment with my new personal trainer this morning so gave Wratty a set of keys - he can go wonder around town in the sun while I'm out. Caught up with him at home at 12.30pm and lovely Wratty bought a bunch of irises to brighten up the house: 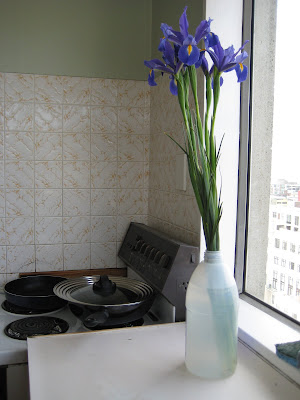 Unable to find a vase, Wratty had to make do with an empty detergent bottle 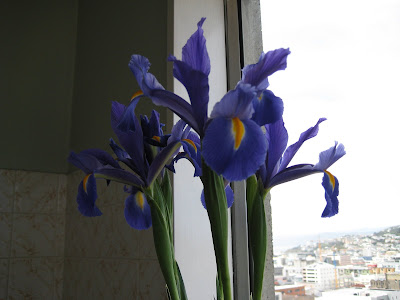 
We left home near 1pm to drop Wratty off at airport. Oh, I'll miss you guys - it was awesome to spend the weekend with both of you, showing you around Wellington and my life here in the little time we had together and I look forward to our next catch-up! Keep in touch!!