I had put myself forward to volunteer as a programme seller this year at the Montana World Of Wearable (WOW) Awards Show 2008 event held at the TSB Arena from 25th Sept - 5th Oct. As a volunteer, I had to work 2 hours at the start of each show for a chunk of 5 days in a row - since I was away in Samoa for the first half, my volunteering started on the 1st of October. Why volunteer? Well, I would choose to model like my friend, Mariana, but I didn't meet the height requirement so ended up as a programme seller instead in exchange for a free ticket to the show. Tickets vary from $50 - $165 and the better seats were very quickly sold out when first released for sale. Oh, but volunteering was so much fun! I would definitely consider doing it again :)

The WOW Awards Show is an extravagant two-hour performance that celebrates creativity in unique and colourful ways on-stage, taking static display and art off the wall. Breathtaking works of art are designed for the moving body, then individually choreographed into an extraordinary theatrical show entwined with every facet of performance: music, dance, lighting, drama and comedy. The annual show has been going on for 20 years now and this was the first time I was watching this world-class event!

Day 1, I was given a WOW crew shirt to put on (and I got to keep it), a shiny golden hat to wear, introduced to the other volunteers I would be working with during the week and tasked to hand out the Dominion Post People's Choice Award forms to the streams of people as they walked into the arena. The shirt was too large for me (male size M) - I looked as if I was wearing a pyjama top! Well, I couldn't change the size since it was the only size available so I was stuck with it for the next 5 days. Oh well, if it fits Helbert, it'll be his for keeps after the event.

It was awesome to be in the midst of the crowd, just absorbing the atmosphere and excitement, the happy vibes that oozed out of people who came from Wellington and around NZ (perhaps some from abroad as well), and some even taking the opportunity to dress up as if attending a formal ball. One lady even hugged me! She was so excited and had been looking forward to the show the whole day!

Pre-show performers were out and about, mingling with the crowd and it was such fun to watch them: there was a couple donned in costumes as if they imerged from someone's back garden, a trio of silver people, the amazing Tess (drag queen), Maria (oh, 'she' sings so amazingly only to fall asleep in between), Vishnu (blue Hindu god) and a few comedians. I never get tired watching these performers, mainly Maria, even though I can predict when she would pretend to fall asleep - just cracks me up everytime :)

A photo taken of sculpture SkyBlues on Post Office Square, Jervois Quay, as I walked to get my car and headed home for the night: 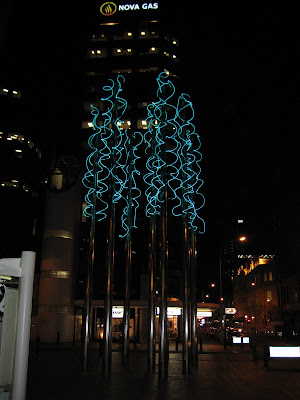 Day 2 & 3, I was tasked with selling the event's programme books (cost $20 each). Definitely more fun than handing out competition forms.

Oh, so much running around and full-on days - I went from working my full-time job, to volunteering to teaching gafieira!

Before I started my shift on Friday, I made a quick visit to ARA Libertad, an Argentine navy school ship that has recently berthed at Queens Wharf. Didn't cost anything to visit the ship. The weather was windy so I didn't stick around for long - just walked around the tall ship to take some photos. Hmm, it would have been more interesting if they did a tour of the ship of all the levels like the tour I did when MV Doulos was in town. On Libertad, visitors could only explore the main deck and do it on their own. Photos of the ship: http://www.flickr.com/photos/8070917@N05/sets/72157607783510155/detail/

I went to see awards show on Friday night. The show was an absolute WOW (despite the seat I got was for the impaired vision i.e. I had a staircase rail blocking part of my view to which I had to sit at the edge of my seat for the whole show)! Though I've heard mixed reviews from friends who had seen the shows over the years, I thought the whole show was very cleverly choreographed and the garments presented were just amazing.

The show started with the pre-show performers egging the crowd in their sections to cheer loudly against each other. The garments were displayed in different sections and themes - there were even live animals making stage appearances! I wondered how they manage to keep chickens, pigeons and ducks to sit in baskets or serving trays without them flying off in the arena...

Watching the show, I felt as if warped into a different world, a world that was dream-like, unreal and of fantasy. Imagine being in Alice of Wonderland world, where anything and everything could be worn and was art! Designs range from simple to intricately complex, with a section of magic illusion of UV light and a bizarre range of bras. As part of the 20th anniversary celebration, the audience also had a chance to see all the winning garments from the last 2 decades.

Some of my favourite garments seen tonight include: Fonteyn's Folly (dancing dragon), Punk Bird Family (punk mix with African birds), Chicken (a rocking chair incorporated into a dress), Perfect Pins (large size pin cushion and the winner of the Dominion Post People's Choice Award), Ornitho-Maia (this was this year's event winner, a beautifully feathered costume made with leather), Me & My Shadow (this was from the Illumination Illusion Section, a big entertainer and his skinny shadow in the spotlight), Dragon Fish (1996 winner), Superminx (1999 winner - 2 large cushion chairs) and Rattle Your Dags (2007 winner - a sheep).

A must-see show for those of you who haven't seen it and for those who have, continue supporting the show!

Caught up with Rosel for lunch at Simply Paris on Saturday. Simply Paris is an authentic French establishment on upper Cuba Street, serving delicious light meals, exquisite cakes and pastries, and an excellent range of coffee and tea. Oh, and the serve the best pumpkin soup I've ever had in town - fresh and clear (not thick with cream). Yum! Was nice to catch up with Rosel :) Photos of us girls at Simply Paris: 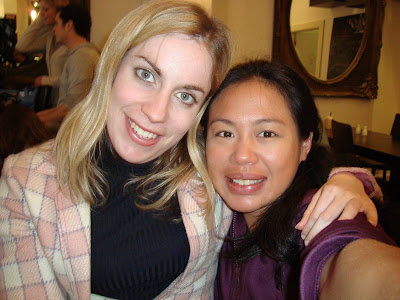 We took a drive up to Mount Victoria after lunch before I dropped her off at Queens Wharf for her to visit the Argentine ship. Urgh, weather was so crap outside! I cannot believe you still want to visit Libertad, Rosel - it's pouring and so windy outside! Brave, brave girl...salute to you!

Tonight, I worked behind the merchandise counter and had to work the till - eiks! I was amazed to learn that some of the merchandise were made from previous years display items such as flags, calendars and eggshells were used to make the notebook holder. Very cool :) As a volunteer, I got given a 20th anniversary badge as well (lucky me, the badge was sold out before the event ended!).

Had brunch over at Christian's on Sunday before finishing up my last day volunteering at the WOW event. Was lovely to catch up with Christian - though we see each other twice or 3 times a week, we hardly have time to really talk as we would be mostly dancing. Better still, I didn't have to cook! Well, I did bake a cake for our brunch. Just sick of eating my own cooking so it was a nice change to try Christian's instead. We should do this again soon, Christian - it was nice :)

I was a wandering programme seller this afternoon. It was funny that I had to stop promoting the programme as we were running out so I was selling in silence (yeah, just holding the programme and walking around until people approached me). Volunteers got a programme each. It did cross my mind to sell it off and earn $20 but nah. Going to keep this one as souvenir. It has been a WOW of a week here at the awards and I look forward to the event next year. Photos taken during my time at WOW: http://www.flickr.com/photos/8070917@N05/sets/72157607778466796/detail/