Did another commercial shoot today, this time for the ASB Bank of New Zealand Goldstein TV commercial series. Was playing an extra role as one of the background people and the shoot was done at several locations around Wellington City waterfront.

The weather was so cold and windy today! We started our day at 10am at Oriental Bay beach and sand was flying EVERYWHERE - not a great day for outdoor work :( Me and other extras had to hide in the bus stop nearby in between the shoots to shield ourselves from getting blown away! The first shoot was pretty easy. Me and another extra, Matt, just had to sit at one of the benches by the beach in our current clothes (we were in coats - winter wear) so we ended up chatting and convincing ourselves that it was summer. My fingers were getting numb due to the cold!! During our work and chat, we also got to see a live nature show in view of a large seagull ripping another dead seagull into bits. The bird was pullling the intestines out of the dead bird's broken neck - eww, gruesome!

Steve Mellor, better known to most of us Kiwis as Goldstein, was on site for the day for all the shoots. Wow, he sure is as tall as I imagined from the commercials. It was somewhat odd hearing the crew call him Steve - the Goldstein name just comes up when I see him!

About 12pm, we moved to The Band Rotunda, into one of the community rooms located on the level below the Fisherman's Table restaurant to wait our call for our next shoot. While we waited, some of us indulged in a bit of reading, snooze, card playing and just chilling out. Pretty cruisy, huh? It's always good fun doing small pieces of work like this :) Interestingly, I was the only Asian today.

Shortly after, lunch was served and we had the most yummy Middle Eastern lunch of Morrocan lamb, salad and pilaf. Yum...And yes, lunch was provided to us free. So was tea and coffee throughout the day :) Helps keep us awake!

After lunch, me and another extra, Sara, spent about an hour outside just walking in the background on the beach. Up and down, up and down we went. So damn cold!!

Got changed into another set of clothes and everyone moved down to the the carpark at Freyberg Pool & Fitness Centre for another shoot, this time with staff from St John Ambulance. More walking in the background. Photo taken on my mobile phone while we were there: 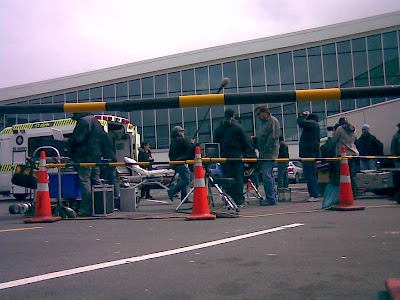 The last location for the day was at Zarbo, and you guessed it, more walking but this time we had to pretend it was summer and take off our coats and layers!! Argh, cold! The weather seemed to get worse as the day goes by. There were some shoots done of a few of us having coffee and chat outdoors as well. The final scene was taken indoors and I had to pretend I was drinking coffee and chatting with Sara. We had to mouth our chats - we couldn't make any noise as the crew was doing a recording of Goldstein's voice. Wrapped up at 6.15pm - phew, what a long day! Hopefully get to see a glimpse of myself in the upcoming commerials though I doubt it very much. It'll be like for a nanosecond! But it's all for the fun of it ;)