Compared to last week, this week has been pretty quiet, with lots of gaps between work and social activities. Sure felt odd when last week was so packed and now, everything seems to slow down...

On Monday, I caught up with Matt for lunch at Masala Indian Restaurant. I have not seen Matt for quite some time and now I know why - somebody's in love! Hehehe...Matt's busy with gf Jo these days. I was giving him a hard time because I hardly see him anymore :P Very happy for him though :) Was great to catch up and bring each other to speed on what's been happening in our lives. Hope to catch up again soon, Matt! Bring Jo along next time so I can put a face to the name.

Later in the evening, I met up with Bon for a movie at Readings Cinema. It was the second time I've seen him since our group dinner so it was nice to catch up and get to know him a bit better. Ooo, Wanted was a really cool movie - good choice, Bon! Actually, any movie that has Angelina Jolie kicking butt is a good movie to me. Don't know why but she just brings out confidence, feminism, power and sexy all rolled in one. You should check out the movie if you haven't seen it. Thanks for the company, Bon - we'll catch up again soon :)

Tuesday through to Thursday, my evenings were spent helping out in gafieira class. This was the first week that I had classes 3 days in a row. A few new faces in class this week - Alicia came back and we had Paul and his daughter, Casey, join us on Thursday. Cool! We are slowly expanding in numbers :) Paul is a regular salsa dancer but surprisingly, I've never danced with him before - make sure you ask me for a dance next time we are at a salsa event, Paul! Don't think I would be out dancing on Friday night after dancing so much this week...

Oh yeah, I should mention about my photo shoot! I was called in by my agency for a photo shoot on Wednesday afternoon - this was for a brochure for the NZ Post Group. I've never done a solo photo shoot before so I really didn't know what to expect. Exciting! Was told to pack up several sets of work and casual clothes but the crew only took photos of me in my white shirt + pinafore-like dress + boots. I must say, I do look quite cute in this look - a mix of innocence but naughty behind the cover :P Though frankly, I'm not so sure if it would suit the corporate brochure...The shoot itself only took about 1.5 hours and the crew was lovely, making me feeling relaxed during the shoot. Crew Michelle did my make up and hair while the photos were taken by Grant Maiden with assistance from staff of the advertising company, telling me what poses and positions they want be to be in. My role was to pretend to paint symbols onto a clear perspex board (yep, I had a paintbrush to hold) - in actual fact, I was painting onto nothing. Had a quick look at the photos taken and boy do I look young with a ponytail! Would have thought the person (me, that is) in the photos was 16. Hope to be able to get a set of the photos from my agency for keeps and will post them up then :) Photos taken on my mobile: 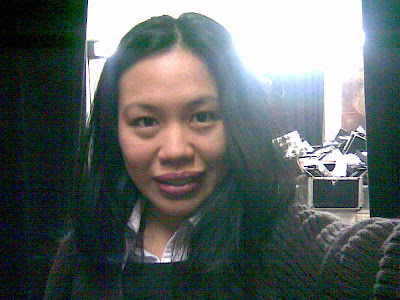 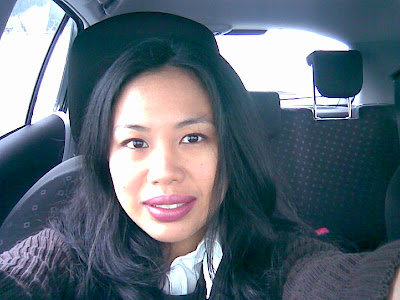 I was feeling tired, busy with work and needed a pick-me-up on Friday so walked over to Schoc Chocolates on Tory Street for one of their special hot chocolates. Kalwant's told me about this place but I've never been there. For $5, the lovely barista recommended I try the Chilli Hot Chocolate to lift up my mood. With the first few sips, I couldn't feel the chilli sensation but just wait till after you down your first gulp - I could feel the after effects of chilli coming up my throat. Woah, I'm awake now!

Friday evening was a quick drink with work mates and my friend, Chris, and the rest of the night spent at home. Just going to take it easy tonight.

Was up early on Saturday and headed to the gym by 10am. Bumped into Matt and Jo at the gym - ah-ha, now I can put a pretty face to the name Jo. Pleasure to finally meet you in person! Matt was telling me that Sharon's moving to Melbourne come end of the month - what???!! Yes I've heard Sharon mention it but I didn't expect it to be so soon. Must catch up with her and find out what's going on.

Caught up with Scott for coffee at Fidels Cafe in the afternoon to discuss our joint birthday party plans - yep, both of us are September babies and our birthdays fall on the same week so we thought it would be a brilliant idea to have a joint party since we already share many friends in common. And it'll be a blast! I do feel somewhat bad though that Scott has to do most of the actual work pre-party as I would be away for a week in sunny Samoa (sun, sun, here I come!) and only return the morning of the party. But he's cool with it so I will leave the party plans in his capable hands :)

The evening was spent with the Tay family (dad's family friend) and their friends - we all got together for a potluck dinner to celebrate the Mooncake Festival. Traditionally, on this day, Chinese family members and friends will gather to admire the bright mid-autumn harvest moon, and eat moon cakes and pomeloes together. For us, it was just eating lots of food! Russell's homemade roast pork and Auntie Daphnne's homecooked meals are always so yummy! I ate so much...It was a nice night, just chilling out with friends, chit-chatting and laughing together.

Come Sunday, I was bored out of my brains. I cannot believe my mobile didn't even ring this weekend - where has everyone disappeared to??? Went for a swim then returned home to update my blog when I heard my mobile beep - FINALLY! Chris was keen to go for a walk in the sun so we took my car and headed over the Lyall Bay Beach for a walk. It was a sunny day but still breezy. And the water definitely ain't warm! Photos taken today: http://www.flickr.com/photos/8070917@N05/sets/72157607335558146/detail/

Thanks for the company, Chris - catch up again after my trip!

Headed over to Southern Cross Bar in the evening to see some salsa friends and have a few dances. Didn't feel like staying in and felt the need to uplift my mood with some dancing. And boy was it packed tonight! The heats for the dance competition was still on so the salsa dancers could only dance in between songs played. A few of us tried to make do with Ceroc and Rock N Roll music - was so funny to dance with Luciano and watching him doing 'the twist'. Just cracked me up!

Several of us then left Southern Cross and went out for dinner/supper. Damien, Ron and I ended up having our meal at Auntie Meena's on Cuba Street. Auntie Meena's is a vegetarian Asian diner and another one that I've never been in. Frankly, the food here is a bit more expensive than diners of its kind but it was good (for the record, I'm not a vegetarian). I had a dumpling laksa which cost me $11 - I like it! Oh, but what really intrigued me was Damien's BBQ pork buns and fried chicken. I just had to try it for myself to find out what it tasted like. The buns tasted like the real thing (and there was no meat inside!) but the fried chicken was strange. Stranger still to find the bone of the drumstick to be an ice-cream stick. It was fun just us three sharing and trying our food - suddenly felt like back in Malaysia with friends who love to try different food and share them :)

Next week will be a bit crazy as I will be working until 2 hours before my flight!