Saturday, 9th August 2008: Went swimming this morning after a late night out. Oh my god - I was just so tired and struggled during my swim session. Eee, I've been so slack...

After my swim, I went to pick up Ken and we headed to Wellington Town Hall to check out the 11th New Zealand Migrant Expo 2008. I thought it might be interesting to see what they had to offer. Plus the 2nd Fiesta Pilipinas was also on at the same place - great! Kill 2 birds with one stone. It wasn't a very nice day though today - cold and windy...

Ok, so the 2 events were nothing like what I had pictured them to be. I had expected cultural performances, food, travel kiosks of different countries, cultural clubs and the like. The migrant expo itself was really an expo for new migrants in the country - the exhibitors were from the city council and government institutions like tax department etc., so for old migrants like Ken and I, it was nothing new or of interest to us. Did a loop around and ended up bumping into a few friends of mine. The Fiesta Pilipinas was non-existent when we were at the Town Hall which was quite strange. Oh well, let's go grab a coffee then!

We then walked to Latitude 41 Cafe and Bar for a cuppa and spent the rest of the afternoon catching up on the nice cushy couches till the place closed and we had a window period to run to my car (it was pouring like mad with gusty wind!). I've never been in here before - it was one of the regular coffee places that Ken visits frequently. Nice place to just chill out with friends for the afternoon. It's nice to hang out with Ken - he's like a brother to me and we can openly talk about anything not worrying if we would offend each other :)

Dropped Ken home and I went back to get showered and out again for dinner with Hew and her friends. Hew had organised a dinner tonight at Nicolini's Italian Cafe Bar and Bistro on Courtenay Place, another place I've never stepped in before in my 7 years of living in Wellington (shame, shame). Her boys Jonathan and Edmund were there and so was a group of her work colleagues, a majority of them Filipinos.

Urgh, the weather was absolutely disgusting outside - this was one of those nights you want to curl up in your blanket and rent out a DVD...and I need to make a run to the restaurant as there weren't carparks nearby!

If I'm not mistaken, Nicolini's is Wellington City's top Italian restaurant and one that is always packed. If you do not book a table in advance, it is very unlikely you would get one when you pop in. I didn't know they had a back dining area too (I've always thought the small front dining area was it). The place was rather romantic in setting, with dimmed lights and candles all round. However, it was very noisy which puts a damper for those who were planning a romantic candlelight dinner here. The food was great and in massive serving - lucky for me I hadn't had lunch so I could finish most of my fettucine :) Hmm, fettucine with garlic and shrimp...

Hew's work colleagues are a crazy and funny bunch, reminding me very much of friends back home in Malaysia. Oh and they love taking photos! I think there were like 5 cameras and all taking the same photos! Hehe, I think this is a typical Asian thing :) I was quite surprised that they already knew stuff about me despite it was the first time I've met them. Apparently Hew had been talking to them about me and I was pretty much the topic of discussion of their work week. Hahaha, I didn't know I have a fan base in the hospital!

It was a lovely night spent with Hew and friends - lots to laugh about and the group setting just felt so familiar, bringing me back to days in highschool where friends tease one another and get up to silly antics. Photos taken tonight: 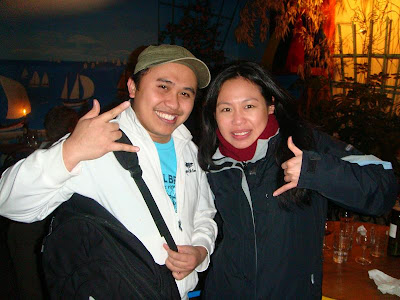 Photo of me and Bon 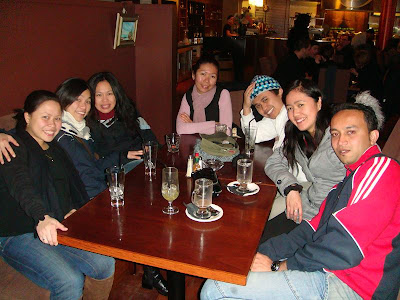 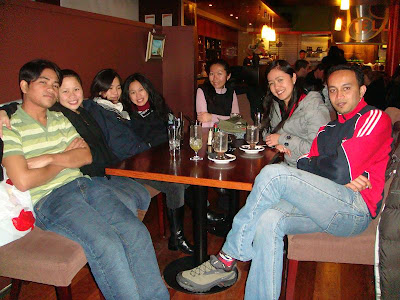 And here's another group photo with Mark (Corina's hubby)