It was another gorgeous day today and at around 8am, I got a text from Claus suggesting we head out for a walk. Of course! Wouldn't want to put such a beautiful day to waste :) Photos taken from my apartment this morning: 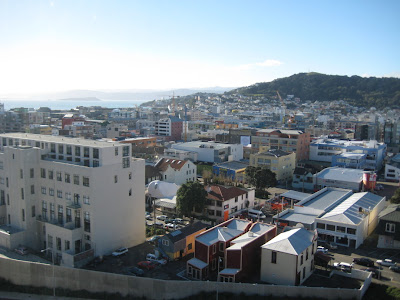 View from my kitchen towards Oriental Bay 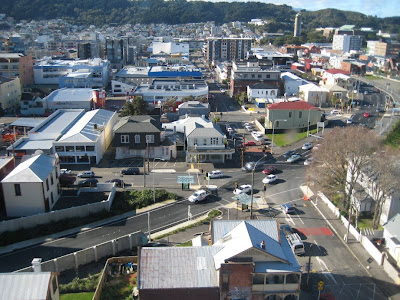 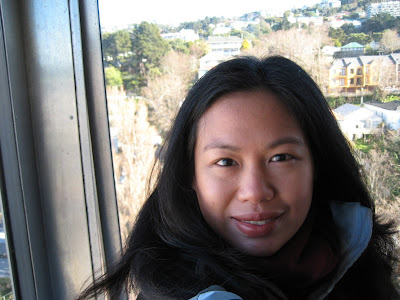 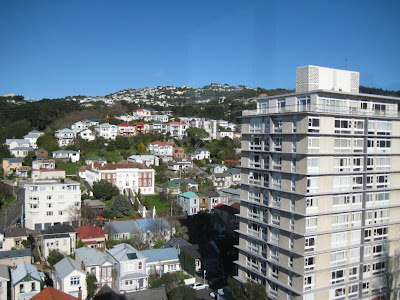 View from my living room towards Brooklyn Hill

When going on walks with Claus, expect to be surprised. Again, he didn't tell me where we were heading so I just put on enough warm clothing in case the weather changes during the day. I had thought it would be another track at Brooklyn Hill today but no - we were heading out to Rimutaka near Featherston, out of Wellington City to walk one of the tracks there! Cool :) I'm always up for new adventures!!

It must have been snowing last night at the hills. It was such a beautiful sight to see snow-capped mountains as we drove towards our destination...just gorgeous...

Look, look!! I kept pointing out to Claus as he continued driving at the road signs that stated the Rimutaka Hill Road was closed. Oh-o, does that mean we won't be able to get there today? We decided we'll head over to see if the road reopens by the time we arrive and take it from there.

Yep, sure enough, the road was closed with a whole long queue of cars but that didn't stop Claus so we had the car parked at the side of the road and started walking up the closed road! This is so wrong and illegal!! I have never in my life walked on a road that is closed, let alone one that has no pedestrian path when in use (it was a State Highway). And it was funny seeing the faces of the drivers and passengers we passed as we walked - they asked if we were walking to Featherston to which Claus said yes and I couldn't contain my laughter seeing the other person's eyes stare at us in shock. No way would we be walking to Featherston and back - that would take us hours! We even took photos lying in the middle of the road! It was insane and fun at the same time :)

We walked for about 30 minutes or so, chatting and racing each other each time we came up to a Keep Left Unless Passing road sign. Ridiculous! There was nothing but hills and a deserted road with 2 weirdos walking in the sun like they own the road. My guess was that the road was covered with ice earlier this morning thus the road closure - we could still see the remains of melting ice on the grass at the side of the road.

"You two - in the truck, now!" said the driver in one of those massive blue trucks used to block roads (and I think also to melt icy roads). Oh-o...turns out that they were going to reopen the road and we were not supposed to be walking on it - too dangerous. Obviously someone reported that we were walking on the closed road so the truck driver came in search for us to pick us up and drop us back where the car was. Eeks! Slap on the hand for us two rascals! And to make matters worse, our little walk got a few others following our footsteps - there were other pedestrians walking with their dogs uphill and the truck driver had to get them to literally run back downhill. Lucky for us, we only had a short leg to run to the car. It was so cool to be up high in a huge truck that made me felt so small being inside. Darn, should have taken a photo in the truck which both Claus and I regretted later not doing so :/ It was just funny and crazy how our morning went!

Back in the car and we continued driving uphill to the Rimutaka Trig Track. The track is a 45-minute return walk that starts near the summit of the Rimutaka Hill Road (555m) and climbs to the northern crest of the Rimutaka Range (725m). The track zigzags all the way up to the top and on a day like today, make sure you bring your camera. The view stretches all the way to southern Wairarapa including Lake Wairarapa and from the Aorangi Mountains south to Cape Palliser.

It was such a lovely walk and because we were the 3rd and 4th people walking the track today, it felt 'untouched' and could see only our footprints on the paths we walked. It was as if we were in the Narnia movie, magical euphoria. Well, my state of euphoria was quickly interrupted when I felt something cold smacking onto my clothes. Claus had started war and was throwing snowballs at me! What the?? I'm going to get you! Unfortunately my small hands were not fast enough to make snowballs to attack back - he was attacking me at machine gun rate! :P

Make sure you wear windproof clothing and sturdy shoes - at some of the exposed places, it can get quite windy and proper footwear is required because the track is rocky and with snow, slippery. I had my sports shoes on and by the end of the walk, I could feel my socks soaked through - eew! Photos taken today: http://www.flickr.com/photos/8070917@N05/sets/72157606725541524/detail/

It's always a joy to hang out with Claus. We somehow end up doing spontenous and fun things when we hang out. Looking forward to our next adventure, Claus!