Friday, 29th August 2008: Rosel had invited me to join her church event this evening and we caught up beforehand for dinner around 6.30pm at Sweet Mother's Kitchen. I've never stepped into Sweet Mother's Kitchen - the last time we tried grabbing a bite here, it was so packed (was packed tonight too!). But the food was nice, a mix of New Orleans and Mexican food - you can get curly fries with your quesadillas :) Worth a visit if you haven't been here.

Around 8pm, we headed over to this conference centre in the Mt Victoria suburb where Rosel's church, ARISE Church Wellington, was hosting a youth event called HUGE. Cost us $10 per person to enter and an exclamation mark stamped on our hands (I think this was the symbol for the event). We literally walked into what felt like a rock concert - the youths were jumping up and down on their feet, hands up in the air, electric guitar and drums played by the band up front, and just feeling and breathing in the high-energy environment. So this was what the church youths do on Fridays instead of drinking and partying in town...ah...It reminded me much of my aunt's church in Perth which I had attended several times during my stay with her last year. The modern day church catered to suit the needs of different groups. As expected, there were lots of singing and performances, including short comedy stints, and a sermon/service from verses in the bible. A slightly different Friday for me this week compared to most Fridays where I had the usual work drinks and then out for some salsa dancing. Thanks for having me come along, Rosel!


Saturday, 30th August 2008: It was a beautiful day today and I was all ready to head to the gym when Rosel called and asked if I wanted to go for a walk with her. Of course! Bin the whole gym plan - I rather go for a walk in the sun with good company :)

Around 11.30am, I went to pick Rosel up and we stopped by Chocolate Frog Cafe in Miramar to grab some lunch before heading to Shelly Bay for our picnic lunch. My god was the cafe buzzing with patrons! I've heard of this cafe but have never been here myself - located inside Palmers Gardenworld, it was a cafe I wouldn't just stroll in to. Rosel got herself a Spider drink with her sandwich. Spider??? Have never heard of such a drink! Turned out to be a mix of soda and ice-cream, a float, pretty much, but here in Australasia, they call it Spider. Sounded so weird to me...

Hopped back into the car and off we went to Shelly Bay for lunch. Rosel came prepared with a mat which we laid on the pebbly beach, chatted and ate our lunches while enjoying the sun and amazing view. Ah, life is good...After lunch, we walked up the Massey Memorial track to the marble monument, a tribute to NZ's late Prime Minister, William Ferguson Massey and his wife, Christina. It was a short 15 minute walk to the monument and us girls spent some time just chatting and chilling out, taking photos while we were there. You know, I've lived here for over 7 years and I've not been up this track. And the view here on a beautiful day like today is just gorgeous - you could see views over the harbour entrance and the coastal village of Seatoun. So nice to be out in the sun! We decided to take a different track and did a loop through one of the tracks from the memorial back to Shelly Bay Road, heading back to the car. Photos taken today: http://www.flickr.com/photos/8070917@N05/sets/72157607206182285/detail/

The sun was still shining so brightly - let's make the most of it! Headed over to the Botanical Gardens for a quick walk to the rose gardens (there rose bushes were bare - not the right season) before saying our goodbyes for the day. Thanks for another wonderful day out, Rosel! We'll catch up again soon :)

Tonight was Thomas's last evening in Wellington. Yes, he's really leaving us this time, heading back to Germany to start a new chapter in his life with some travels on the way back. A few of us caught up at his place for a few drinks before heading down into town to Shooters for the Latin Dance Night salsa party. Photos taken at Thomas's farewell drinks: 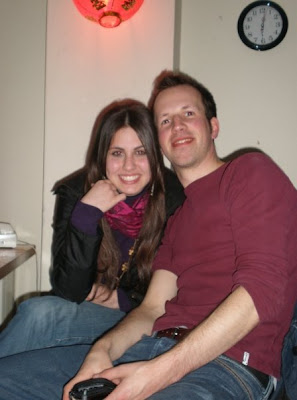 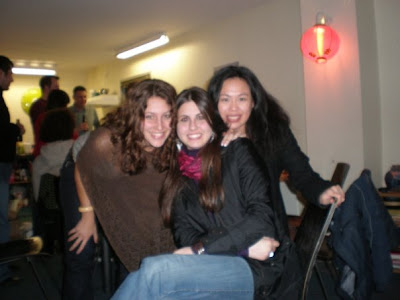 Just us girls - Alicia, Jessica and me :)

Usually, the Latin Dance Night at Shooters can be quite quiet but to my surprise, it was packed tonight! My guess was that everyone was here to bid Thomas farewell and we had a special guest turned up at the party too - Antje! I did a double take when I saw her...what a surprise!! She's back for 6 weeks and it was so lovely to see her again :) And of course, Ramnish was smiling from ear-to-ear...hehe...Photos taken at Shooters tonight: 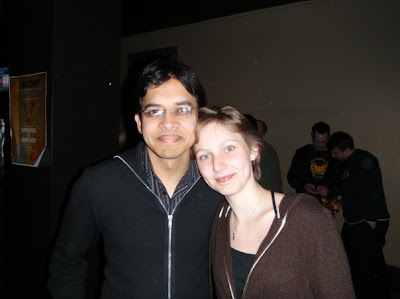 Ramnish and his special guest (and gf), Antje 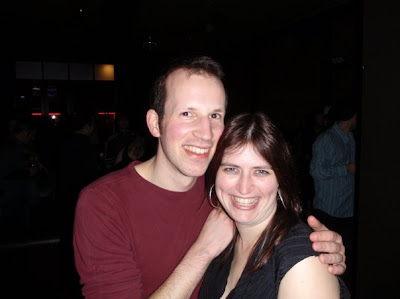 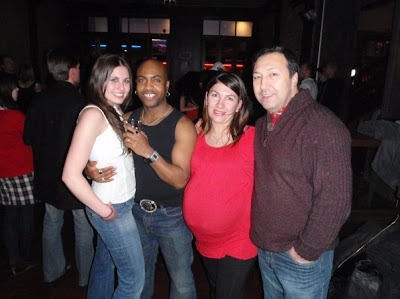 Jessica, Rafael, Lily (still dancing and only 1 week till baby is due!) and her hubby, Carlos 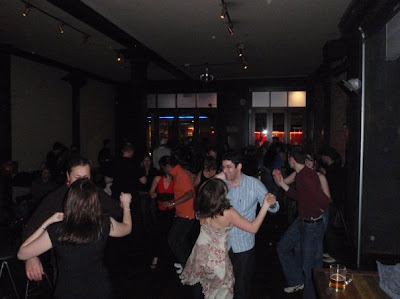 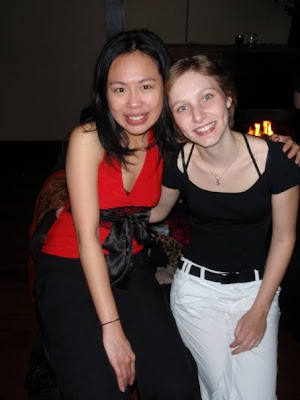 Me and my sweet girlfriend, Antje

I danced A LOT tonight...but loved every minute of it! Few of my Brazilian friends popped in and I left the party around midnight to join Josiane clubbing. But before shooting off, a huge hug to Thomas. Safe travels to you, my dear friend, and keep in touch - you'll be dearly missed by many of us here!

You know, it sure feels weird to go clubbing when I hardly do so these days. Just felt somewhat unnatural? Don't exactly know how to explain the feeling. We headed over to Good Luck Bar on Cuba St, notoriously known as 'the place to pick up someone for the night' or bar to get lucky', and bumped into our friend, Mohe, whom I've not seen for awhile. Was good to see him and hear that he's well :) Jo and I didn't stick around too long and walked back to the Courtenay area to Red Square on Blair Street where we spent the next hour or so dancing to the club music. Carlos (this was Carlos the singer, not to be confused with Carlos, Lily's partner) came to join us for a bit and around 2am, us girls left Carlos at the lounge bar for home. I need to crawl to my bed...danced way too much tonight...What a night!

Sunday, 31st August 2008: I have totally forgotten it was national day in Malaysia today...
Caught up with Scott for coffee this afternoon at Mojo Cuba, a cool little cafe on the upper side of Cuba Street (Abel Smith Street end). There are several Mojo cafes in town and I recall the last time Kalwant and I walked 2 blocks to one, she was raving to me about this tart they sold. Decided to try this $3 tart that she would walk from her office, rain or shine for to which Scott laughed when I mentioned to him about it. My verdict? Yeah, the tart, which was lemon flavoured with a bit of chocolate covered on the side, was nice and of good quality but for 3 bucks and 2 blocks walk, I can do without it. A sometimes treat but not something I would go for everyday.

It was nice to catch up with Scott as we hardly have much opportunity to talk during salsa events. We should do this again, Scott! I had to cut our coffee session short as Claus and I were planning to catch up later in the afternoon. We had agreed to meet at Batucada practice in Thistle Hall so Scott tagged along to see what Batucada was all about. Batucada is a Brazilian word used to describe the syncopated, African-influenced samba music played by a large percussion group (bateria) as part of a street parade or carnival. Personally, I've never been to one of the practices and it was fun to see a majority of non-Brazilians get together to play music in full energy and sync. There were several familiar faces from salsa and from the Brazilian crowd whom I knew who were there dancing samba with the band. Of course, I had to join in and get my feet and butt shaking! Though I didn't expect to be dragged to the front of the line with other sambanistas (female samba dancers) - I don't even know how to samba properly!!! Oh well, I'll just have to rough it out :) Both Scott and I were quite intrigued with the drumming and you know, we might just consider joining the band. What do you think, Scott? Shall we, shall we?? It would be fun!

Claus turned up near the end of the practice and together with the band, we all headed over to Southern Cross Bar for a drink. It was a nice way to end my week, getting to know a few more people and catching up with old friends.