Wednesday, 15th August 2007: Mum, Dad and I went on driving trip to Pahang. Pahang is the largest state in Peninsular Malaysia and 3rd largest in Malaysia after Sarawak and Sabah in the east coast. Nearly two-thirds of the state is enveloped in verdant rainforest, making it a magnificent enclave of lush greenery, exotic wildlife and an abundance of natural attractions.

We left home at 8.45am and arrived in Mersing around 11.15am. Mersing is a town located in the northeast corner in the state of Johor. It is a lively tourist town visited by Malaysians and foreign tourists who come to enjoy the quiet life, great seafood, unspoilt beaches and exotic flora and fauna of the East Coast of mainland West Malaysia. We stopped by pier to snap some pictures but found the seaside was rather dirty.

What is that smell??? CEMPEDAK!! One of my favourite local fruits, this jackfruit-like fruit could be smelt from afar. Obviously someone is selling them nearby....We sniffed our way towards a roadside stall selling 'goreng cempedak', which is fried battered cempedak and I just had to get some! Also bought some 'keropok leko', a combination of fish and sago that tastes best when fried. I used to buy 'keropok leko' every day after school during my highschool years. Hehe, you must think I'm all about food - well, there are just some local delicacies that are unique in Malaysia and not something I get to eat everyday in New Zealand :)

We hit the road again and stopped briefly at Air Papan, 12km north of the Mersing-Endau road - a beach of greyish white sand. By noon, we arrived at Rompin, a small fishing village and township on the southern end of Pahang for lunch. Oh my god! The amount of food Dad had ordered - crab noodles, butter prawns, stir-fry veges and fishball soup, for a total of RM70! We left the restaurant feeling stuffed! Don't think we need to eat for days, Dad...

Along our drive to our resort in Cherating, there were lots of goats and cows roaming near the streets. I drove for about an hour towards Kuantan (the state capital of Pahang) but somehow missed the exit - I didn't see a sign! Not my fault since there wasn't proper and clear indications. Lucky for us, Dad had been to Pahang before and have a rough idea where we were so took over the wheel to get us back on track. It started to pour heavily as we headed towards Kuantan - could hardly see!

Got to Legend Resort Cherating by 5.30pm. The resort is a 4-star hotel with a white sandy beach located at one of Malaysia’s premier holiday spots, Cherating Beach. Cherating is a seaside destination long popular with budget travellers. It is the site of Asia’s first Club Med. Mum and I had a look around the resort while Dad had a rest (he has been here before). Rather quiet with little activity perhaps because it wasn't peak season. The beach looked quite nice though you won't be able to snorkel here due to the waves and very low tide.

Dad took us to Chukai, Kemaman in the state of Terengganu for dinner. Dinner?? I still haven't digested lunch yet...It was about a ½-hour drive away from Cherating. The name Chukai came from the Malay word 'cukai' which means taxes. The town was named so due to its position near the estuary of the Kemaman River, whereby taxes and levies were imposed on riverine traffic, especially during the British colonial period. Terengganu is situated in north-eastern Peninsular Malaysia, and is bordered in the northwest by Kelantan and the southwest by Pahang.

After a light dinner of steamed fish and stuffed crabs at Restoran Tong Juan, we went to check out the local night fruit stalls. By the way, you must try the stuffed crabs - it was really, really good! Not cheap though (RM6-7 per stuffed crab). The stuffed crab was made of chunks of crab meat, onions and parsley which are packed into large crab shell, battered and fried, a served with chilli sauce on the side. Yum!

Stopped to buy more 'keropok leko' for supper with the bottle of red wine we brought from home. No more food, please! I'm absolutely stuffed!!

Guess what? We got locked out of the room! Apparently you weren't supposed to press the lock button and close the door when you're not inside the room. Who would have known? Oh well, just had to get help from the reception.

I was so happy to find that there was free wireless internet available at the lobby so headed over with my laptop after shower. Returned for supper with mum and dad (my tummy was 'begging' me not to eat anymore) and the wine literally knocked us all out after a long day on the road. Photos taken today: http://www.flickr.com/photos/8070917@N05/sets/72157602176624738/detail/


Thursday, 16th August 2007: We headed back to Kemaman for breakfast this morning. On our way, we stopped by another beach called Pantai Chendoh. Again, didn't see any one around which was quite a strange sight to me. In Wellington, if the sun is out and the weather is warm, you need to 'fight' for a spot on the beach.

You know, I never used to go to the beach when I lived in Malaysia. The norm seemed to be that Chinese girls try to keep themselves as fair as possible because being fair-skinned was seen as beautiful. I think this idea still stands today because I've been asked by many family members and friends why I'm so tanned despite living in a cold country. Years of living in NZ has turned me into a sun worshipper and I got quite tanned during my trip in Fiji in May. I like being tanned - makes me look healthier and somewhat exotic :P

You'll find many 'keropok leko' stalls all along your drive to Kemaman. Must be their famous local produce...

Dad took us to Kedai Kopi Hai Peng (Hai Peng Coffee Shop) for breakfast. Anyone that stops in Kemaman would normally drop in to this famous shop for a cup of freshly brewed coffee in a re-furnished old-style kopi-tiam (Chinese coffee shop). The breakfast spread was very nice - you had a choice of Malay food like 'nasi lemak', 'nasi dagang' and a variety of 'kuih-muih' (sweet and savoury cakes) to choose from but they are more well-knowned for the Old-fashioned Charcoal Toast served with Kaya. I like it better in thick toast (you can have it in thin toast too).

After breakfast, we took a walk down Jalan Sulaimani. For small-town Kemaman, there were many shops with posters advertising their job vacancies. We walked past Pasar Chukai (Chukai Market) and the morning market - an interesting and colourful sight of sellers and buyers, and a pungent smell of fish and chicken. Photos from our walk: http://www.flickr.com/photos/8070917@N05/sets/72157602179339806/detail/

We took a drive to Dungun, a coastal district of Terengganu. On our way back, I asked Dad to stop the car so I could buy a 'lemang' (a traditional Malay food of glutinous rice and coconut milk, with salt added for taste, cooked in a hollowed bamboo stick). Costs RM2 for a medium stick. The lady selling the 'lemang' had to split open the bamboo stick in order to pack the rice in a box for me. It would be nicer to have the 'lemang' with some curry than on its own.

Stopped by Turtle Sanctuary, Cherating, on the way back to our resort to find out more about their free turtle watching sessions at night. The sanctuary carries out research into turtle hatching, and also educates the public about these majestic creatures of the sea. Its primary objective is turtle conservation and increasing public awareness of turtles and their plight. We went in to have a look at their museum and a box of baby turtles (so small!) which will be released into the sea later tonight around 10pm. Turtle watching is not guaranteed - we might see one if lucky.

A short rest at resort and around 5.30pm, we headed to Kuantan. It started to pour very heavily (blinding rain). Had dinner at a food court - food was not good, except for the 'ikan bakar' (a Malaysian dish of fish grilled using charcoal).

At 9.30pm, we went back to the turtle sanctuary to watch a video about the plight of the turtles and free the baby turtles. One of the rangers found it fun to tease me profusely (I'm so used to this happening during my travels). We followed the rangers to the beach in the dark (no lights or camera flash allowed) and everyone was given a baby turtle to hold and release. Dad was given a baby turtle (Mum and I didn’t want any - they looked so fragile) and said that the little thing was pretty strong, trying to wriggle away. I hope the little fellow survives out in the open sea - it's hard to imagine how a small creature has to 'fight' for its survival immediately after it hatches. According to the rangers, they can assist by protecting the eggs on shore but must release the baby turtles into the sea to its natural habitat. We didn't get to see any female turtles come ashore to lay eggs - we could stay on through the night and wait but didn't do so.


Friday, 17th August 2007: We checked out of the resort about 10am and headed to Kuantan for breakfast. We are heading home today!

Stopped at Sin Kee Hung Sdn Bhd., a must visit shop when you visit Kuantan since the town is reputable for its fresh seafood, dried seafood and salted fish. The whole shop smelt of dried and salted seafood - the smell lingers in your nostrils even after you leave the premises. Phew! Photos taken this morning: 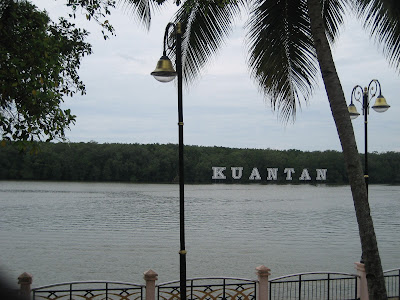 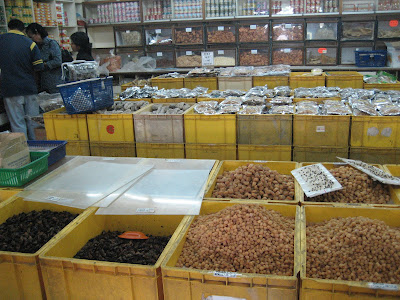 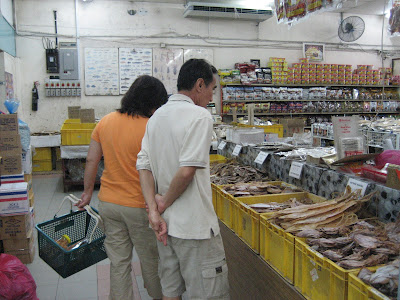 Another large seafood meal for lunch, this time in Chaah (the southernmost town in the district of Segamat, Johor). I'm not able to eat anymore seafood for the rest of my stay in Malaysia...The name Chaah is derived from its geographical location, situated between three rivers. The mandarin pronunciation of Chaah is "San He Gang" ("San" means three, "He" means river, and "Gang" means port).

Got home around 4pm. What a trip! It was very interesting to visit Pahang and Terengganu - I've never been to the places Dad took us to before. There is so much to see and do in the 2 states but we couldn't do it all. Some of the other attractions you might be keen to explore during your visit to Pahang include Cameron Highlands, Genting Highlands, Endau-Rompin National Park, and Taman Negara National Park (this national park has the world's longest canopy walk, over 400 metres). A visit to any of these places would take you a few days. Definitely something I would like to do my next visit to Pahang.

In Terengganu, one of the famous places of visit is Rantau Abang, a very small village most noted for its Leatherback Sea Turtle nesting and attracts tourists both foreign and local. However, in recent years, the number of turtles that come ashore to lay eggs have decreased (I believe this is happening throughout Malaysia, not just in Rantau Abang). Other key tourist spots would have to be the nearby islands like Perhentian Island and Redang Island with their beautiful white sandy beaches and crystal clear waters. Lots of places to visit, but so little time!