Was up at 7am and headed downstairs where we had our continental breakfast. Hmm, I'm craving a full cooked brekkie but that would be at extra cost...Photo of my motel room: At 7.45am, we were all packed and loaded onto the bus. John had been asked to continue on with the tour (we were supposed to be picked up by another tour guide in Launceston). Yippee! We love to have John around :) Poor him, he just couldn't get rid of us!

Today, we had a new traveller join us. Christy (another Brit) was starting her 7-day tour from Launceston so we will be travelling together for the next few days till we return to Hobart. Though I'm not too sure if she will be able to enjoy the trip - she was sick and feeling restless. Feel sorry for her...

Launceston is Tasmania's 2nd largest city (and 3rd oldest in Australia) and known as the 'Garden City' because of its exquisite public parks and gardens. Launceston's most striking feature is the Cataract Gorge Reserve, a nature reserve with walking trails and wildlife just minutes from the city centre, which was exactly where we were heading to this morning! A quick stop up the hill of the Zig Zag Track for photos: 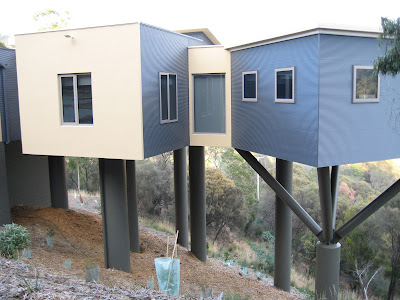 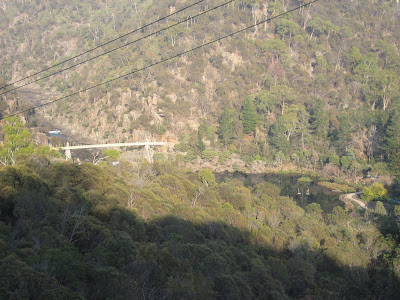 I don't think I would feel safe living in THAT house...


Back on the bus and we were dropped off at the First Basin on the southern side of the Cataract Gorge. Christy wasn't feeling up for the walk this morning so Wratty took her camera to snap photos on her behalf. The rest of the bunch took the walk along the face of the cliff all the way to King's Bridge where John will pick us up.

Ooo, you could take a chairlift across the gorge too!! Launceston's Basin Chairlift is the world's longest single chairlift span, with the centre span at 308 metres. Unfortunately we were there before they were open so I couldn't give it a go :( Bummer...

We began our walk on the Bridge Walk track through Alexandra Suspension Bridge - yikes! No, Niek, don't you even THINK about swinging it!! Oh no, now Louise saw that gleeful smile of Niek's and is holding on to the sides of the bridge...No, stop, STOP IT!

We continued on the Cataract Walk towards King's Bridge. It was a really lovely walk through manicured gardens (and wildlife sighting) which reminded me of the Botanical Gardens in Wellington. Hmm, I like Launceston much better than Hobart. Not sure what it is but there's just something unique about Launceston...Photo taken during the walk this morning: http://www.flickr.com/photos/8070917@N05/sets/72157605242090931/detail/

Hey Wratty, where are you going?? John had the bus parked at Penny Royal World and Wratty had 'disappeared' to the Penny Royal Gunpowder Mill, a mill recreated depicting colonial mills as in the early 19th century. And sure enough, the rest of the bunch followed suit (minus Christy, who was sleeping in the bus). It was closed for renovations so we could only take some photos.

We will be staying the night at Bicheno, approximately 234 kms away from Launceston. Yep, you've guessed it - lots of stops along the way! First stop, Pipers Brook Vineyard where we had the opportunity to sample the local wine. The lovely lady who was serving us was from NZ - what a small world! The gang chipped in to buy a gift set of wines for John. A small token of appreciation from us :) Had to get Louise to pretend she was buying it as a gift for a friend back in Sydney...shhh...Photos taken at the vineyard: http://www.flickr.com/photos/8070917@N05/sets/72157605274965506/detail/

At 12pm, we stopped at Bridestowe Estate Lavender Farm, the largest and oldest lavender plantation in the southern hemisphere. I didn't see any lavender in bloom in the farm which was pretty disappointing (it wasn't the right season). Photos taken here: 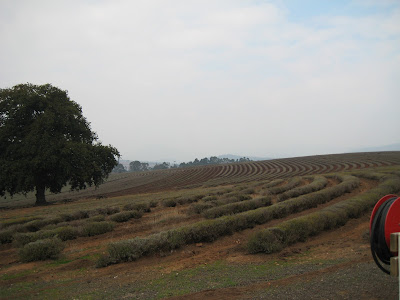 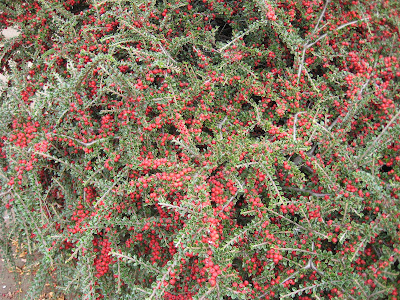 Stopped for lunch at Cottage Bakery in Scottsdale. But before we did so, we ganged up and grouped around John to present him our thank you gift. Enjoy!

This small bakery was so busy and I could see why - their pies were SO YUMMY! Oh, I enjoyed my steak and mushroom pie. Louise had a Guinness pie (I think she would go for anything Guinness - it was the only thing she would have at drinks). Hmm, wonder what that tasted like...definitely recommend you stop by this small town for a pie when travelling through :) Photos taken here: 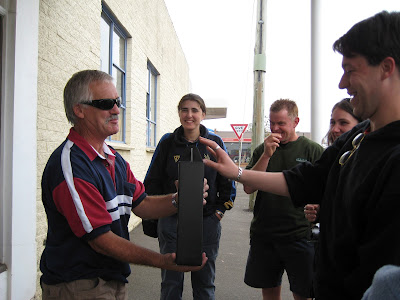 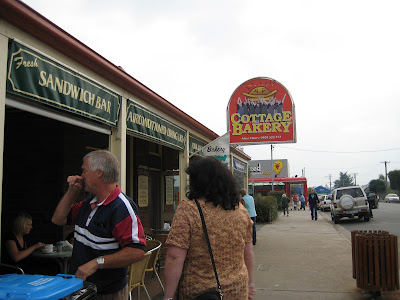 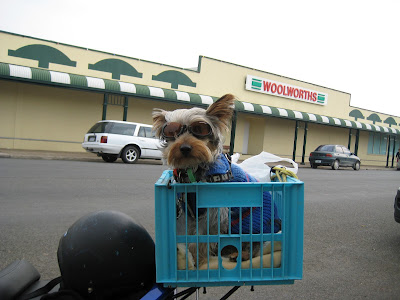 
Back on the bus and off we went to Legerwood for a photo stop at Legerwood Memorial Trees. The trees were planted in honour of the World War I soldiers who came from the area but they grew to a dangerous height and needed to be lopped. The solution? The community of Legerwood asked chainsaw sculptor, Eddie Freeman, to carve each of the remaining trunks to represent the men they honoured. Note keyword 'chainsaw' - how on earth did he managed to carve such intricate designs with a chainsaw???! Check it out yourself: 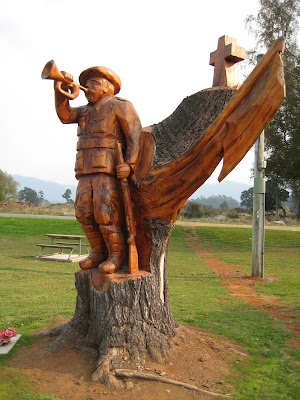 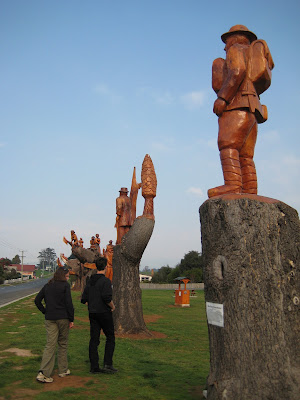 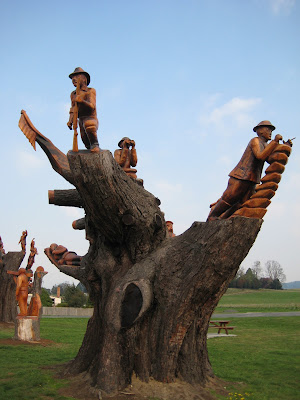 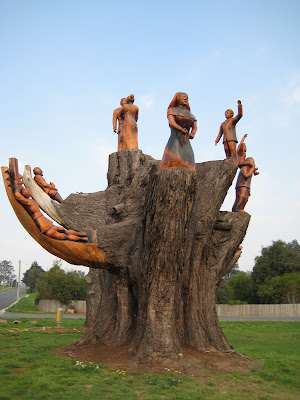 Random photo of wild mushrooms growing (Wratty and John had wild ideas about climbing over the electric fence to get it): We continued on our journey to St Helens and through to Binalong Bay for a walk on the pristine white beaches and orange lichen covered rocks of the Bay of Fires. Yay, beach! I took off my shoes and socks and ran to the beach - oo, oo, cold! The sand was very fine but it felt like walking on ice. Brr! John accompanied us on a walk along the beach and climbed over the orange rocks to see some interesting rock formations.

I couldn't get up to the Toilet Bowl (yes, one of the rock formations look similar to the household facility)! My short legs at fault, again! So Niek and Wratty had to help haul me up after much convincing - I couldn't stop laughing when the boys got me to use Wratty's shoulder as a step and Niek to pull me up. Oh, we should have gotten this on video because it was hilarious!

At 5pm, we were back on the bus and by 6pm, arrived at Bicheno for fish 'n' chips dinner in our cabins. Checked in to Bicheno Caravan Park where we would be staying for 2 nights (hey, weren't we supposed to be in Silver Sands Motel? John told us it was not in his itinerary...) and unloaded our stuff into our cabins. Eee, we got downgraded this time...

Hmm, dinner was nice but I was really hoping it wasn't fish 'n' chips - I don't think it was the best sample of the local seafood though. Most of the group hung around after dinner in the cabin I shared with Louise and Christy for drinks and chatted till late, laughing at Wratty's and John's jokes. Photo of us at drinks: