Got up at 6.30am for breakfast and packed up all our stuff. Breakfast was provided as part of the tour and we just helped ourselves to the cereal, bread, spreads, yoghurt, fruit juice, milk etc. that John had brought along. I decided to go take some photos outside - brr, it has to be like 10 degrees outside! Cold!!

Tried the locally produce golden leatherwood honey - has its own unique and distinct flavour...hmm...

Around 8.30am, we loaded our bags onto the trailer, pitched in to help pack up brekkie stuff for John and started our day stopping at the hydro-dam to see what makes this township so well-known. By the way, Tarraleah's aboriginal meaning is "Forrester Kangaroo". Photos taken this morning: http://www.flickr.com/photos/8070917@N05/sets/72157604809820993/detail/

Today we leave Tarraleah to Strahan, situated on the west coast of Tasmania. Again, plenty to see and do along the way!

John made us all hop down the bus to see this monument. What was so special about it? Ah, turns out to be a monument located near the geographical centre of Tasmania. Photos taken at the monument: 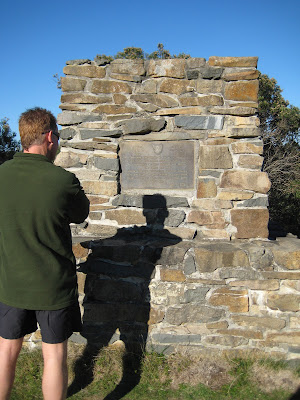 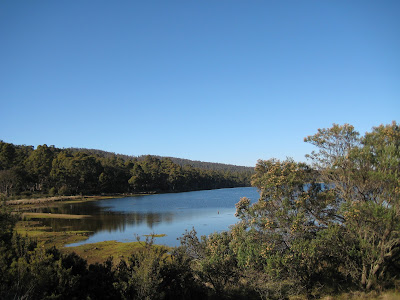 Hopped back on the shuttle bus and headed to Lake St Clair, Australia's deepest freshwater lake at a depth of 200m. Woah, I'm just going to stay a wee bit further away from the lake...It was meant to be a short walk but we were stuck here due to road closure for Targa Tasmania (5-day tarmac-based rally event held in the island of Tasmania) so took our time and did a 3-hour long walk through the Aboriginal cultural walk, Watersmeet and Platypus Bay Circuit. Didn't see any platypus though (Louise was quite disappointed) but guess what we found instead - a tiger snake! The snake was enjoying some sun at the rocks by the beach only to be interrupted by keen tourists taking its photo :P Oh and this fella was venomous too...Photos taken at Lake St Clair: http://www.flickr.com/photos/8070917@N05/sets/72157604820287927/detail/

Had lunch in the area at Hungry Wombat Cafe - I had a chicken salad burger with fries and flat white for AUD11. The rally was over (yay!) so we could continue on our journey with no further delays. Found this interesting sign outside the cafe's toilets: It states: OUT OF ORDER, out of water. Tree across road to use. We all cracked up laughing reading the sign!

Hey, if you take a look at Tasmania on the map, it does look like a shape of a bull - how devillish!

Around 2pm, we arrived at Franklin-Gordon Wild Rivers National Park where we did a few more short walks (great to stretch the legs!). 20 minutes return Franklin River walk - still no platypus in sight. Perhaps the water was too cold? Was cold to me! Photos taken on the walk: http://www.flickr.com/photos/8070917@N05/sets/72157604843102847/detail/

Some trivia questions for you about the platypus:
1) do you know what animal it is closely related to?
ANSWER: echidna (I heard you say the duck or beaver - wrong!)
2) is it a mammal?
ANSWER: yes, even though it lays eggs instead of giving birth (I saw you scratching your head in uncertainty)

The platypus is one strange-looking animal - a combination of a duck and beaver and an otter and believe it or not, it is even venomous (the male platypus has a spur on the hind foot that delivers a venom capable of causing severe pain to humans)!

Next walk, a hike up to Donaghys Lookout. John gave us a challenge - no talking and 15 minutes return on this normally 40-minute return walk. Ready, set, go! We probably stop and chat too often that short walks became long walks...hehe...This was probably the most difficult walk of the day and the gang managed to complete it in 14 minutes! Great job, gang! Photos taken: http://www.flickr.com/photos/8070917@N05/sets/72157604843866085/detail/

Quick photo stop on the way to Strahan at Bradshaw Bridge, Lake Burberry: 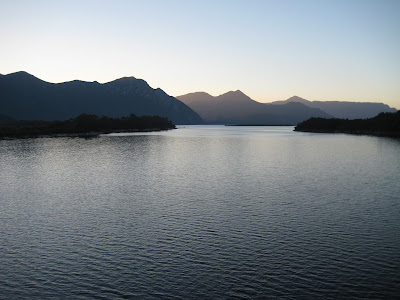 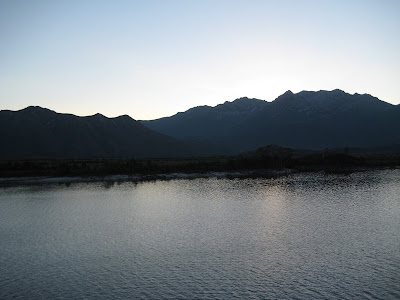 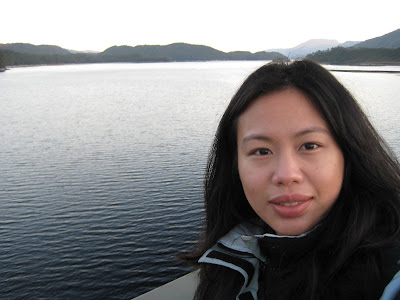 Arrived in Queenstown (yes, Tasmania has a Queenstown too but nothing like the one in NZ) around 5.30pm for a brief sunset photo stop and to stock up on our food supply. Queenstown was historically a mining town with a population of about 3000 today. Photos taken here: 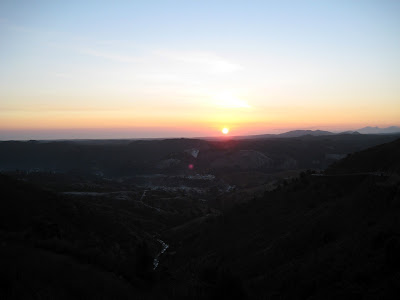 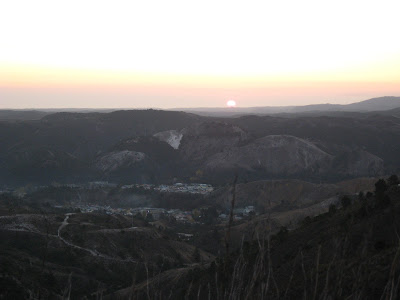 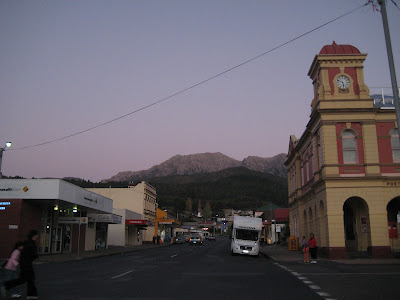 At 7pm, we finally arrived at Strahan and checked in to Cosy Cabins for the night. Did I book myself on a backpack tour or a flash, expensive tour??? The accommodation we've had so far just looked too expensive for a backpacking tour...It was such a lovely cabin with 2 rooms (one for 4 bunks and another, a master bedroom), bathroom, kitchen with cooking facilities, TV, lounge/dining area all in one! Hmm, I could live in one of these to save $$$ paying rent at my current place...Tonight, I'll be sharing the bunk room with Louise - we've decided to give Kate the master bedroom as she's an early riser (we need more beauty sleep :P). Photo of the cabin: Dropped our bags and back onto the shuttle bus - John took us into the township of Strahan where we had dinner tonight (pay our own this time). Wratty and Kate went their own ways while the rest of the gang headed to Hamer's Pub for our meal. John had fresh oysters with an asian dipping sauce as an entree which he shared with the group. Yum!! Very fresh though somewhat small. I had a very delicious scallop fettucine for AUD22 (there were lots of scallops in my fettucine!). Niek was very courageous to try the wallaby steak (wonder what it tasted like). It was another fabulous dinner with loads to laugh about, including teasing Niek to talk less because he wouldn't want a repeat of last night's incident. Hehe...

Back in our cabins at 10pm. Wow, another day has gone so quickly!
Labels: Australia explore Lake St Clair Strahan Tarraleah Tasmania